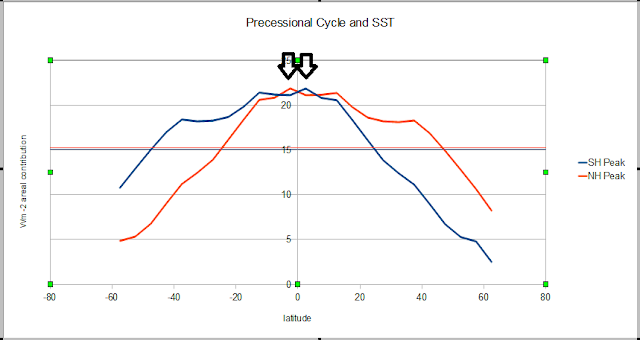 I was curious about how much impact the precessional cycle of the Earth would have on Sea Surface Temperatures.  This chart is the cumulative contribution by latitude to allow for the different percentages of open ocean that would likely be available.  The two mean value lines show that there is a slight difference in total energy, but the main change is in the energy distribution.  Again, since I am only considering open ocean area, there is no albedo correction for the energy.  Because of the land area differences, there would be a large land albedo change, but not so much on the oceans I would think.

The two black arrows point out peaks that are just off center of the equator.  Since the Earth rotates, there is a Coriolis effect that tends to somewhat uniformly mix the two real hemispheres, but would tend to block mixing between the two hemispheres.  So there is likely to be a pretty big change in the internal heat transfer even though total energy is about  the same.

The precessional cycle is not fixed.  It is like a tire out of balance and can change how much weight is out of place.  The largest weight or mass imbalance is likely due to glacial mass, which we don't have a lot at this point in history.  If the precessional cycle is 21,700 years, then it would take about 10,850 years for the Earth to switch from the Southern hemisphere peak to the Northern Hemisphere peak with the orientation changing about 1 degree every 60 years.  In a full precessional cycle the thermal equator peaks would move to the extremes shown and spend more time located on the equator for two beats of the cycle.  Since the blue curve is the current orientation, Earth should be in the build glacial mass mode.

Because of the asymmetric distribution of land and oceans, the precessional cycle should have a four count beat.  SH max - Equator max - NH max - Equator max, producing 5425 year cycle in paleo climate records.  Oddly, there is a 4300 year cycle that is related to orbital precession.  That is a fifth, not a quarter, indicating that something else is involved in the paleo climate records.  That could be ocean mixing lag of 5425-4300=1125 years, but since the precesssional orbit is subject to fluctuation, kind of hard to verify.  Noticing that the SH max and NH max orientation would likely have different deep ocean mixing dynamics, there could be a range of lag times from the 1125 years that should be easy to spot to 1700 years that was determined by C14 isotope mixing.  (1700+1125)/2=2825/2=1412 years which is fairly close to the Bond event range.  Since precession progresses at roughly 60 years per degree, with a mean frequency of 1412 years, every 23.5 degrees there should be some reason for a perturbation if the Bond cycle is actually a cycle and not just unrelated events.  Since the timing is roughly right, it might be nice to figure that out here pretty soon.

The orange curve in this reconstruction shows that northern high latitude ocean surface temperatures tend to have the roughly 4300 year pulses when they are not covered with glacial period ice.  As I had shown before the equatorial region paleo reconstructions have a similar cyclic signature.

None that I have found so far have a clear signal of the 4300 or 1412 cycles as real cycles, just recurrent patterns from so not well known perturbations with solar forcing on its own not enough to trigger the events.  The internal imbalance with solar though may be able to explain some of the events.