We Need a Better Index

The opening of the Drake Passage had a huge impact on the mixing efficiency of the global oceans.  The flow through the Drake Passage from the southern Pacific to southern Atlantic is on the order of 130 million Sverdrup.  Since the Northern Hemisphere doesn't have a passage with as much flow potential, there is a large imbalance in the efficiency of the hemispheres to equalize energy distribution.

Attempting to locate the cause of the long term pseudo-cyclic climate changes is difficult to say the least, having a better set of indexes for the modern era wealth of data would be a large help.  Since "weather" oscillations make up the bulk of indexes, trying to adapt regional indexes to hemispherical and global impacts is a lot like herding cats, I have been toying with what might be better "global" indexes based on ocean temperature differentials at the two most important transfer points.  The Drake Passage from 65S to 55S with the eastern region from 0W to 60W versus the western region from 60W to 120W.  In the north, the North America is in the way so the northern region is based on 55N to 65N with 0W to 60W as the eastern region and 120E to 180E as the western region. 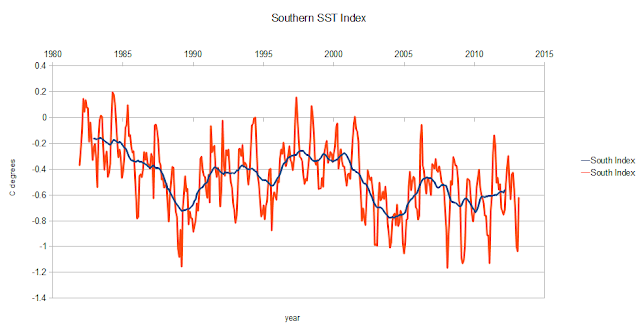 This is the southern SST index using Atlantic minus Pacific temperature differential across the Drake Passage. 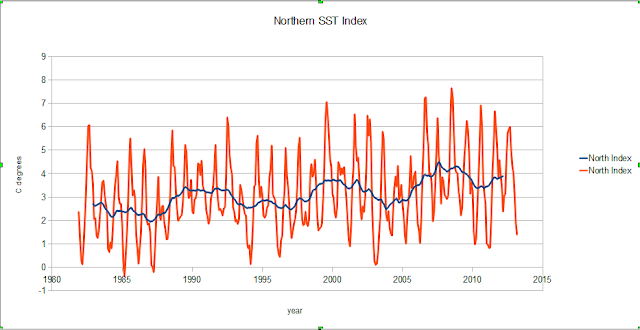 This is the northern SST index also using Atlantic minus Pacific regions which is the differential roughly across the Bering Strait, at least a close as satellite data can produce.

These are both non-standard indexes, so this post is just to describe what indexes I am attempting to use.  They could end up being totally useless, but since there are a large number of paleo ocean cores in both general regions, what the heck.

The energy flow through each of the passages is really what I am interest in, so a "global" index will require a little data massage. 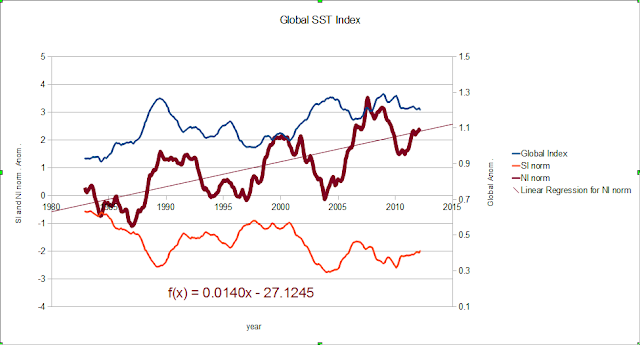 This is after a little massage.  The standard deviation of the southern index is 0.164 C and the northern index sd is 0.582 which produces a ratio of 3.54 which is used to "normalize" the two hemisphere proposed indexes.  After the normalizing massage, the two index are nearly mirror images of each other.  The difference of the two produces the red "Global" curve with the 0.14  unitless trend per decade.

In order to be useful, the "global" index would need some reliable units to associate with the trend.  As both of the individual hemisphere indexes are Atlantic to Pacific differentials and the "global" is the difference of two differentials, allowing for a number of scaling options.

The reason for this attempt to develop a new set of indexes may not be apparent.  However, the impact of global ocean mixing seems to be grossly underestimated by some of the online climate change junkies and this approach might help to explain the complex thermal inertia of the oceans.

NOTE: The data used for the charts is from the nomads.ncep.noaa.gov OIv2 data set from 1981 to 2013.  I will try to post a spreadsheet after I clean up a few issues, but it shouldn't be difficult to replicate if anyone is interested.
Posted by Unknown at 9:34 AM