Is Climate Chaotic or Not?

This is a classic argument, is climate chaotic?  My position has always been that it depends on the degree of accuracy you want.  Climate is chaotic in that is has unpredictable events over different time scales, but if you are just looking for a ballpark estimate, that is doable.  The above is a comparison of five Atlantic ocean paleo SST reconstructions.  The Kim and Reuhlemann reconstructions are in the tropical Atlantic on each side of the equator.  They are the most stable, but you can see there is an antiphase relationship.  Average climate based on those two would be extremely stable since their average is nearly constant.  The lower three include two for the Arctic region and one for the southern hemisphere ACC region.  They are more chaotic as in higher variance and comparing the two Arctic reconstructions, there is considerable phase shifting in a rather small region.  If you average them all out you would estimate a relatively stable climate, but there is more noise.

If you consider that noise climatic weather, then you can reasonably predict future climate.  You have to define what period should be called macro-weather or micro-climate.  30 years by these reconstructions would not be climate, but either the Macro or Micro version of your choosing.

This is just the three higher latitude reconstructions.  In the top two, there is roughly five degrees of temperature range, but there is northern hemisphere land mass that responds more dramatically to change versus the southern hemisphere when land and polar amplification is minimal.  So in the NH that +/- 2.5 C fluctuation could produce +/- 5 to 10 C higher latitude fluctuations depending on the magnitude and duration of the events.  That region is only 25% of the global area so with +/- 5 C fluctuation there, could be +/-1.25 C global climate fluctuations.  If you are predicting climate to +/- 1.25 C, then you could have reasonable confidence in your predictions.  The more precise you want your prediction to be, the less likely you would be correct.

Now notice the roughly 5000 year upward curve in the SH reconstruction by Nielsen versus the roughly 4000 to 8000 year downward curve in the Bendle reconstruction.  At the end they become synchronized near the time of the Little Ice Age.  Now there are two polar regions which would have a combined climate impact that could exceed the +/-1.25 C range base solely on the NH region.  Now you would either need to increase your Macro or Micro time frames or expand the uncertainty margin for your predictions.

Your call, is climate chaotic or not?

UPDATE:  Those lags are pretty important. 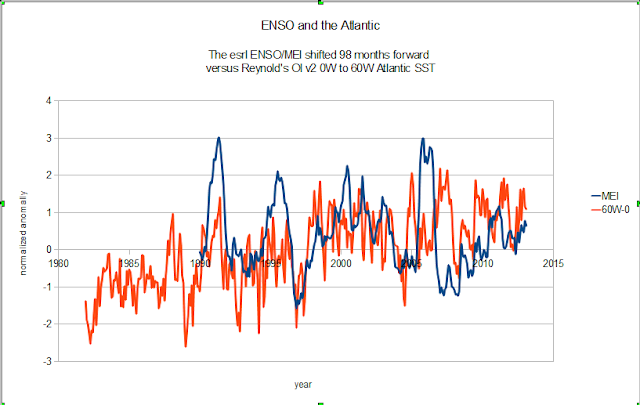 That is the ENSO index normalized just to see fluctuations compared to the Atlantic SST.  98 months or just over eight years produces the best fit.  From 1990 to 2005 there was considerable NH warming. 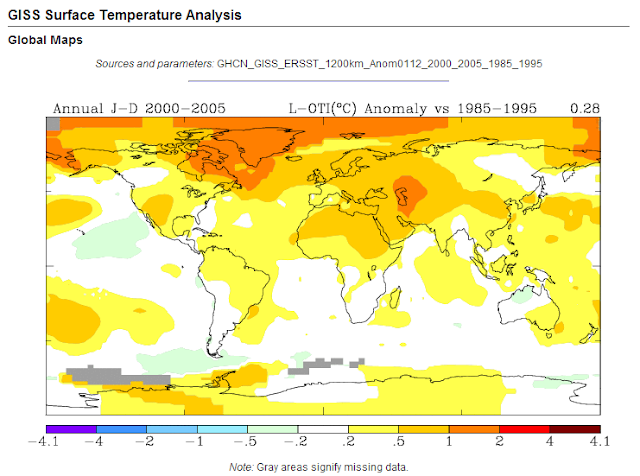 Not too surprisingly, most of that warming was in the NH North Atlantic region.  Imagine that?
Posted by Unknown at 7:38 AM