" The dominant forcing factor appears to be precessional 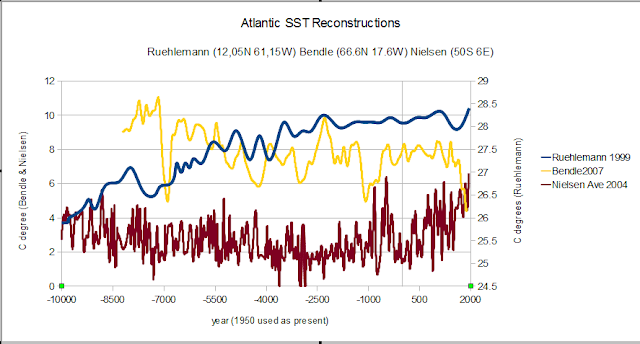 Since I am trying to find some better index for Global Climate to compare with various SST reconstructions, these are three of my more recent downloads.  By starting with the atlantic and using the satellite SST data by region, I should be able to come up with some reasonable latitudinal weighting system for the reconstructions.  It is a bit of a bear since the sample dates are so inconsistent, but so far it looks like I may be able to get about 400 years resolution, which is fine for my purposes, but not so great for chasing every 0.5 C tick in the instrumental record.  So far for the Atlantic at least, roughly 2500 BC was the warmest period, mainly because of the tropics and Arctic pulsed up together.  There is a smaller MWP Atlantic pulse and the rather sharp LIA decline following that.  How those work out on a global scale, I don't know, but so far most of the fluctuation is in the Atlantic with the NH having the largest volatility as should be expected.

Nielsen et al. is just my most recent paper that agrees with Manabe and the GFDL gang and strongly hints Hansen has screwed the pooh by underestimating long term variability.
Posted by Unknown at 1:23 PM