On the Relative Importance of Meridional SST Gradients and Climate "Sensitivity" 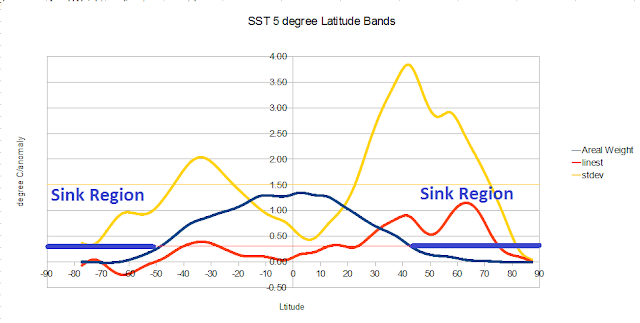 Climate "sensitivity" is one of those curious subjects.  There should be A, singular, climate sensitivity, according to the greenhouse gas theory, that will eventually produce some degree of warming per increase in atmospheric CO2 concentration.  It is really simple, there is a natural log response per increase, and an exponential increase currently which will warm until some limit is reached after including various, positive feedbacks.  It is like being given a blank check with no clue what the account balance happens to be.  "Skeptics" want to know the balance and the "warmists" just want to run around preaching doom and gloom.

Well, finally, the conversation seems to be turning to real limits based on regional "sensitivities".  The chart above has some basic information based on Sea Surface Temperatures by 5 degree latitudinal bands.  There is the standard deviation of temperature, Areal Weight (degree C contribution by area) and the ordinary least squares linear trend by band.  I have included two "Sink Regions" which are areas of the ocean which have an annually averaged surface temperature less than or equal to 4 C degrees, the approximate "average" temperature of the total ocean volume.  Most of the standard deviation is due to the annual solar cycle that ranges from about 1313 Wm-2 in summer to about 1408 Wm-2 in winter with a mean of about 1361 Wm-2.  The sink region in the Northern Hemisphere is larger, based on latitude, due to the seasonal solar cycle, but due to the lower ocean surface area, the Northern Hemisphere ocean sink potential is lower.  The Northern Hemisphere is warmer than the Southern Hemisphere because the Southern Hemisphere has better mixing and more sink area than the North.

Since energy prefers the path of least resistance, the more efficient Southern Ocean Sink, the Antarctic Circumpolar Current, would be the more likely limiting factor for "equilibrium" climate impact of CO2 increase.

Since a real limit to the impact of CO2 may be lower than initially estimated, that realistic upper limit seems to be politically incorrect to discuss.  Instead, the "Fat Tail" of possible warming is the strawman tossed out by the "warmists".  At the "current" estimated rate of deep ocean warming, it will take 300 to 400 years to increase the "average" temperature of the oceans by 1 degree C, which is roughly the "no feedback" climate "sensitivity" to a doubling of CO2.  Since we live on a planet that rotates about 366.26 times in an Earth year, the hemispheres are somewhat isolated by the Coriolis Effect.  In order for the Northern Hemisphere warming to be felt in the Southern Hemisphere, CO2 has to back up NH cooling like a clogged toilet.  That requires the thermal mass of the NH to store twice as much energy as the thermal mass of the SH.  Since the Atmospheric thermal mass is limited by the specific heat capacity of the atmosphere and CO2 does not add a significant amount of thermal mass to the atmosphere, there is a physical limit to the amount of "damage" CO2 can do in terms of climate "sensitivity".  The heat has to be stored some where.

I put this post together for the master of simple diffusion since he has finally realized that the data he has been using is just not up to the task.  If he cares to, I have even put together a spread sheet with the current state of the art sea surface temperatures in 5 degree bands so he can double check to his heart's content that long term ocean oscillations will determine the ultimate climate "sensitivity" on a time scale of millennia.   5 degree SST for Web.  I am not sure how well that Google docs spreadsheet works, but he should at least be able to cut and paste the data.

For some light reading, Relative Importance of Meridional SST Gradients...
Posted by Unknown at 8:09 AM