This is just a quick post to get some charts up for a future discussion.  Some of you might find it interesting though.

I have been playing with a static model that needs a good deal of work yet, but since there was a discussion on ocean oscillations and how best to use what for which, I thought I would get back to the battle of the hemispheres which is always going on and creates a lot of noise.  Using the NOMAD3 Optimally Interpolated Sea Surface Temperature data, (click the link if you want to play). I broke the global SST up by zonal bands.  Since I have a fairly good break down of ocean versus land area by 5 degree latitude, I used the two to create my own "Global"  average SST, with "Global" meaning from 65S to 65N.  Of course all the data sets have different bands they like to call regions, so this is not quite equivalent to the GISS regionals that use 24 degree zones, but fairly close.  This gives me a "mean" SST of around 19.5 C which is lower than AQUA, but then AQUA uses 60S to 60N.  There is no consistency it seems.  Anyway, "global" average SST appears to be higher than the 16 to 17 C thrown around if you consider only ice free oceans as oceans. 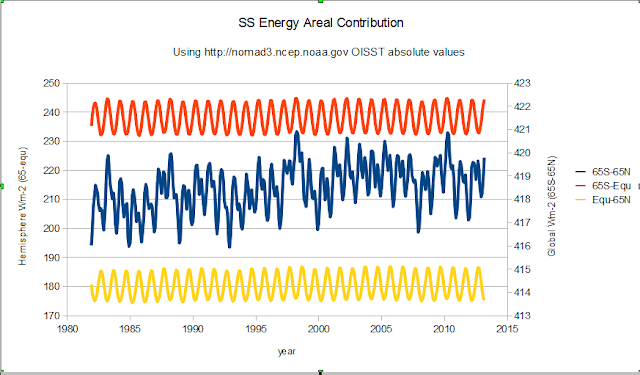 So this chart would not be as messy, I just used the NH and SH here with the absolute temperatures converted to Wm-2 using the standard Stefan-Boltzmann equation.  The point is to show that both NH and SH have fairly stable seasonal cycles that are nearly pure sine waves but a bit of a lag that produces the standard "Global" temperature average look.  With 65N-65S having a mean temperature of about 19.5 C, the "Global" mean energy is roughly 419 Wm-2 for the ocean surface with the SH providing about 240 Wm-2 and NH about 180 Wm-2.  That actual "average"  NH SST is about 2 C warmer than the SH, but due to the smaller area, it has a smaller contribution.

Because of the internal lags, there is a little frequency modulation going on which is why I tend to spend a good bit of time on harmonics and RMS values instead of the whole "average" thing most prefer.
Posted by Unknown at 11:48 AM