A constant should be constant.  You can compare Total Solar Insolation reconstructions and find a lot of variation in the "constant".  Leif Svalgaard is a solar scientist I think that is now at Stanford University that has noted how climate scientists tend to pick and choose what value of the Solar "constant" they like for a particular purpose.  With my RMS versus "average" post, I seem to have stirred up some discussion of my sanity.   Why?  Because I think a constant should be a constant. 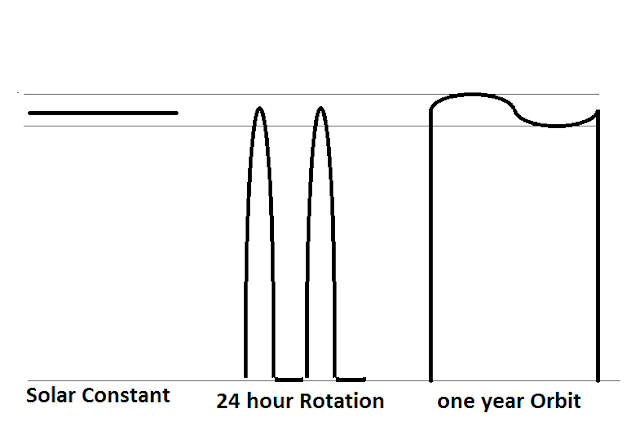 So here is the problem.  Because the Earth revolves making one rotation in 24 hours you could have what David Springer points out a half rectified sine wave.  The RMS value of a half rectified sine wave is half of the peak.  If Earth had a perfectly circular orbit with no axial tilt, the solar constant would be and the input power would be peak/2 period end of conversation.  Since the Earth orbit is far from perfect, peak/2 is an estimate.  I contend it would be a low estimate.

Does it matter?  If the estimate produces an insignificant error, it doesn't matter.  If it matters totally depends on the degree of precision you wish to obtain.  Since the subject is climate science, a one percent error is roughly equal to the impact of a doubling of CO2, so one percent error is my initial "baseline" for significance. 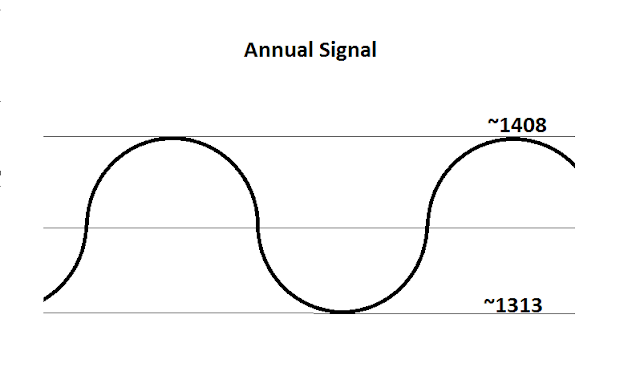 Due to the elliptical orbit alone, solar intensity varies nearly 100 Wm-2 at the true top of the atmosphere each year.  The typical RMS value of a pure sine wave is 0.707 times the peak of the sine wave,~50 Wm-2 or 35 Wm-2.  Because of axial tilt, the period of the sine wave applied varies by ~10% or 2.4 hours at latitude 45 degrees.  We no longer have a pure sine wave.  Now I contend we need to consider the "true" peak, which is actually the Peak-Peak value and the duration to come up with a more accurate estimate.  That would mean that up to 70 Wm-2 of energy is acquired internally that would have to be transferred with the typical losses in transfer and conversion along the way.

So what would this mean?  That TSI would need an ~70 Wm-2 (65 to 67 Wm-2 appears to be that actual value) DC component due to annual orbit variation.  That DC component is nearly 50% of the "Greenhouse Effect" impact and has absolutely nothing to do with atmospheric gases, only orbital variations.

I could of course be wrong, but averaging averages is prone to produce errors.  Since the solar "constant" has been revised downward and the estimated "average" surface temperature based on the 1951-1980 also revised downward, it would be very easy to confuse the causes and effects.
Posted by Unknown at 5:51 AM