Yesterday was Pi day, 3.1413, well close enough anyway.  I should have posted this yesterday, but I was wanting to do some double checking.

A blackbody is not a gray body.  A black body distributes is energy uniformly over its entire surface.  In order to produce a "blackbody" for experiments, the grand masters of radiant physics had to take a few liberties and just use a fraction of a surface that approximated a black body, a blackbody cavity.

The sketch is borrowed from wikipedia.  The grand masters used the little hole to isolate the spectrum they wanted to test.  Earth doesn't have a nifty little hole that provide just the spectrum we like, so we have to scratch our head a bit and figure how closely Earth can come to being a real blackbody.  Well, that should start with the furnace or inside of the box.

The Sun is very close to an ideal blackbody and provided the energy that goes into the cavity to stoke the furnace.  Instead of a slit though, Earth has pretty large oceans that allow the solar energy in and currents to slowly mix the energy.  Unlike the moon and asteroids, the liquid oceans allow for more uniform distribution of the energy so Earth can behave more closely to a true blackbody.

Without the subsurface mixing inside the box, the energy from the sun would be distributed based on the total energy available and the cosine of the latitude of spherical surface receiving that energy.  Since Earth has a fluid "interior", I speculated that the distribution would diffuse based on the Square root of the cosine latitude.  Then the average would be TSI*cos(L)/pi for the moon and TSI*SQRT[Cos(L)/pi] for the Earth, if it had ideal internal transfer. 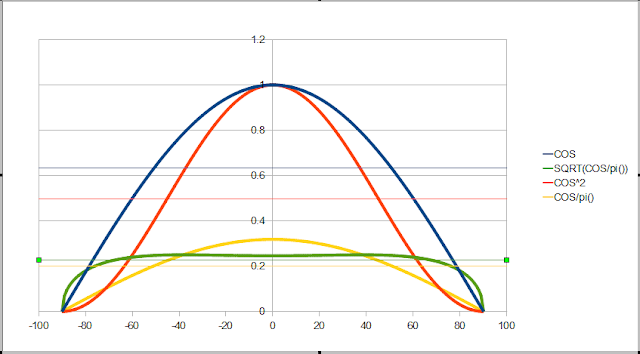 While I don't have very good data on the ocean thermoclines which would be the most idea black body surface, I do have sea surface temperature data by latitude and an estimate of average insolation by latitude that I posted in Ideal versus Observation.

What I neglected to show in that post was the Ideal with mixing versus observations. 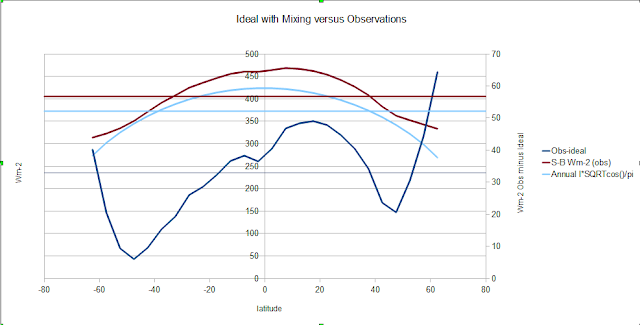 This compares the observations with the SQRT[Cos(L)/pi] annual average.  Again, since this is a long term average and since clouds are not fixed albedo factors, there is no consideration of albedo in this comparison.  You will note that the southern hemisphere is lower than average and the Northern hemisphere higher just like Toggweiler et al at the Geophysical Fluid Dynamics Laboratory have noted. If I compare the estimate average surface temperature of 399Wm-2 based on more current estimates to the ideal estimate, the emissivity factor would be 0.921 instead of the ~0.924 commonly used with the Stefan-Boltzmann Law.  While I am sure I may have a mistake somewhere, the fit is just plain remarkable and should be noted by skeptics of the use of Blackbody equations and deniers of natural ocean oscillations.

Now armed with this fine tuning of the blackbody baseline, I should be able to produce a more accurate static model with meridional flux values for a future post.
Posted by Unknown at 10:01 AM