While the deep oceans should provide the effective black body source to mate radiant physics to my more mundane thermodynamics, the deep ocean data is not all that great.  That requires picking a less than desirable reference layer that has reasonably accurate observations.  So far, the what appears to be the most reliable is the the satellite derived Sea Surface Temperature (SST) data.  Since I am really more concerned with the sub-surface of the oceans, I am going to compare the average solar insolation by latitude using TSI time the Cosine of latitude divided by pi approximation.  I want to include the orbital eccentricity without getting to complicated, so I have set up a spreadsheet for winter, summer, spring and fall values to produce an average average insolation. 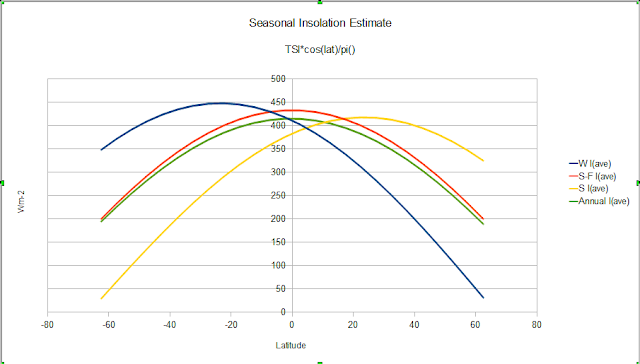 The Spring and Fall (S-F) curve in orange is based on 1361 Wm-2 Total Solar Insulation (TSI) is slightly greater than the Annual average in green.  Since I am using only the ocean areas most likely to be ice free most of the year, the range is from 65N to 65S. 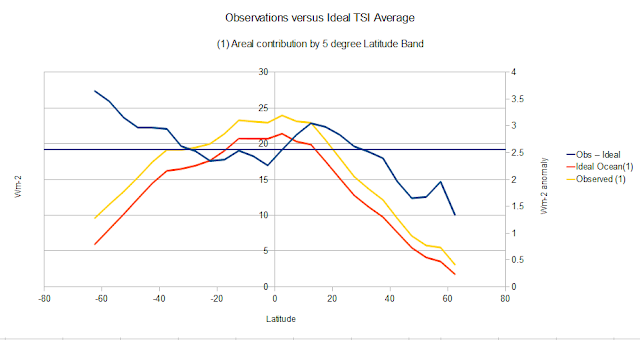 Using the optimally interpolated SST data along with the actual area of ocean per 5 degree latitude band, this chart compares the observed SST to the "Ideal" SST using the average insolation shown above.  The values listed are cumlative contributions by band.  The sum of all the contributions for 65N to 65S is 350 Wm-2 for the Ideal model and 416 Wm-2 for the observations.  Note that the difference is 66 Wm-2 for them that have been regular blog followers. The blue line is the difference showing an average of 2.5 Wm-2 with a range of roughly 1.3 to 4.75 Wm-2 difference.  Considering all the uncertainty in the approximations, that is pretty darn close.

Remember, there is no albedo adjustment at all involved in this approximation. Since the area used is open ocean and clouds are not stationary, typically forming after peak insolation anyway, albedo is not as much a factor in the average energy absorbed by the liquid oceans of the planet.

I have to clean up my spreadsheet a bit, then I will do a post on the impact of orbital precession on SST which should be interesting.
Posted by Unknown at 9:13 AM