For whatever reason, there was a Little Ice Age that appears to be about 0.9 C cooling than today or possibly 1940.  Depends on your choice of "normal".    Solar tends to fit the the rise from the LIA, but not perfectly enough for the carbon minions.  So I have put together two charts of Solar Possibilities. 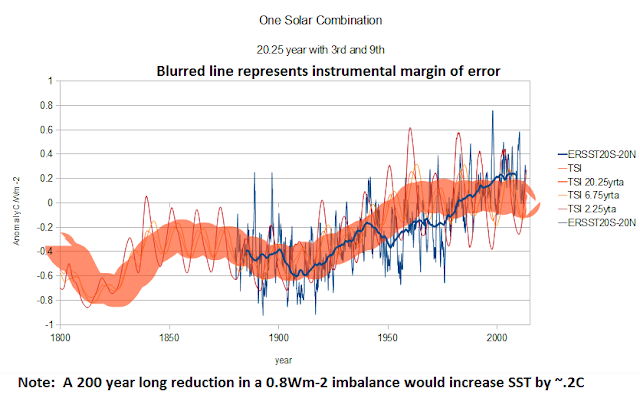 One period that seems to be common is the 27 month or 2.25 year lag in the tropics.  There is also the Hale cycle which is roughly 20-21 years and I included a 3rd harmonic, 6.75 years. I used the longer 20.25 year curve to blow up the margin of error in the instrumental.  If it was not for the 1945 la nina, the fit would be very good.  But El Nino/la nina events occur and the stronger ones before a shift or regime change. 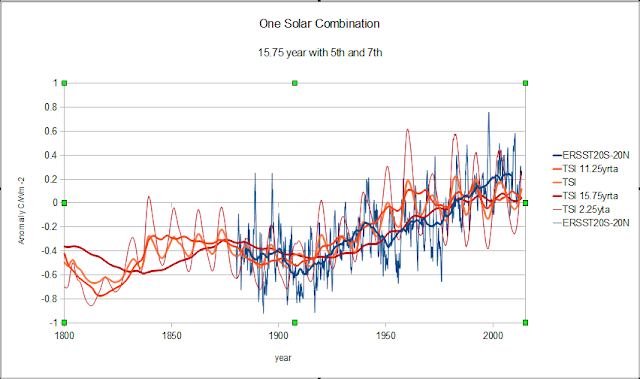 This one is still based on the 2.25 year base lag but with a 5th, 11.25 years which is close to the "standard" solar cycle and a 7th, 15.75 years which would be an 11.25 plus a 4.5 lag.  The internally generated 15.75 pseudo cycle would be a 3rd of a longer 47.25 years settling pseudo-cycle about mid-way between the solar 3rds.  Any lag that synchronizes with a fundamental would produce some amplification.  This one is kind of interesting because the 11.25 47.25 and 15.75 curves show two paths.  An ENSO free path, slow charging and an ENSO path, fast charging.  Not that this is what happens, but this is the kind of thing that can happen in a bi-stable system.  You try to rev it up too fast and it shifts to a slower gear.

I left the solar in Wm-2.  If you consider a 0.8Wm-2 ocean imbalance, once the "charging" is complete or hits a charging speed bump, the imbalance would add to the surface energy instead of being absorbed.  With an average ocean temperature of about 18 C, stopping a 0.8Wm-2 imbalance would basically increase the average surface temperature by .15 C degrees.  That increased surface temperature would interact with the atmosphere potentially amplifying the impact by 2 or up to 0.3 C degrees.  For example if instead of just staying "average" that energy is transported poleward it would have an impact of 0.17C potentially amplified to 0.34C degrees.  So the reduction in imbalance could produce between roughly 0.2C for a round number and 0.34 C.   Solar in this case would not be driving climate as much as just recharging climate or adjusting the climate charging rate.

There are plenty of "other" potential feedback items like water vapor and ice/snow melt, but if solar was at one time assumed to cause the 1940s temperature peak, shifting into a lower gear could have extended that solar forcing to ~1985.

Since there is not real way to determine how the internal oscillations/damped response curves will synchronize with so many irregular forcing/feedback mechanisms, the path shift or gear shift is just one of many possibilities.  It does look interesting though.

Since solar/volcanic impact varies regionally, I may be able to compare a few different regions to see what periods may be more likely to synchronize.

UpDate: Since I had the spreadsheet error I revised the last chart to make is less confusing hopefully and included the southern hemisphere ocean band fro 30S to 60S for comparison.  There is more involved than just solar, so I scaled the ERSST ocean data by 0.75 to improve the fit. 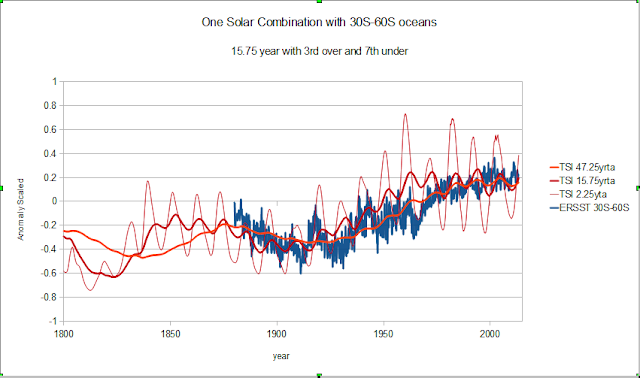 The longer lag appears to be more dominate in the well mixed southern oceans.  As I said, this is not "The" response curve just a possible combination of internal mixing lags with varying forcing.

Just to be complete here are other ocean regions. 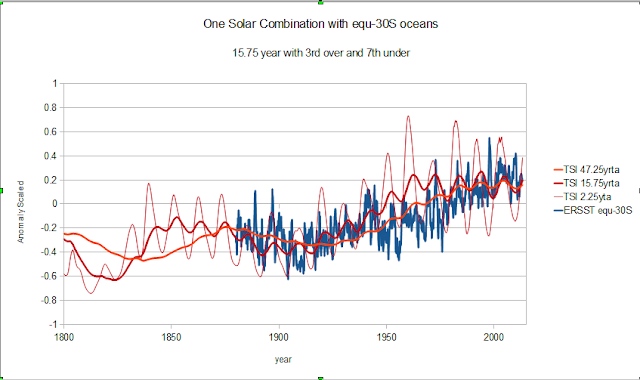 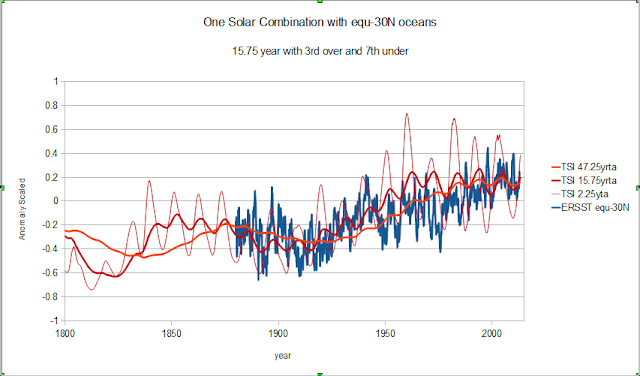 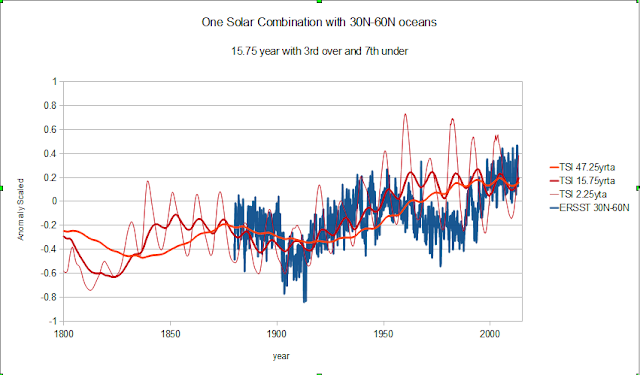 And this one is the longest instrumental record. 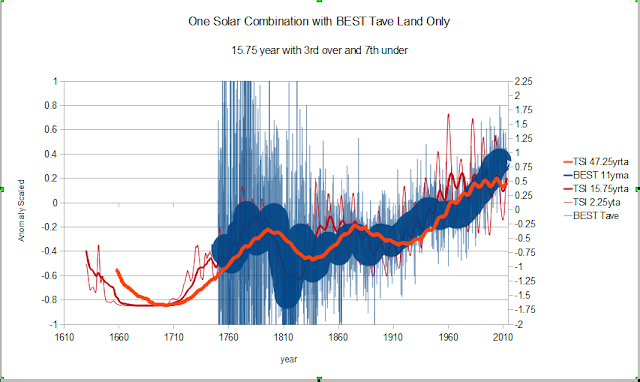