Why Separate Energy and Temperature?

This is one of those basic of basics posts.  Surprisingly it will probably benefit some that think they know more than they do. 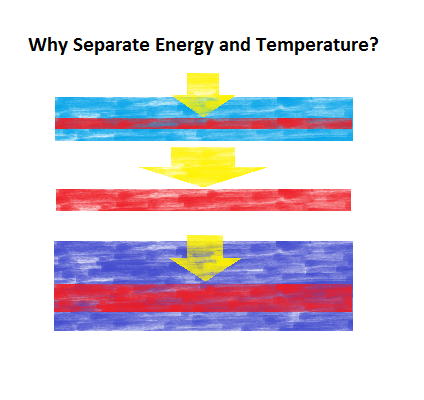 Let the middle layer have a specific heat capacity of 1, the lower layer 4 and the upper layer 2.  If each block receives the same amount of energy and the lower block warmed by one degree, the middle block would warm by 4 degrees and the upper block by 2 degrees.  Specific heat capacity in units Joules/(gram-K) is one of the thermodynamic properties you should consider. 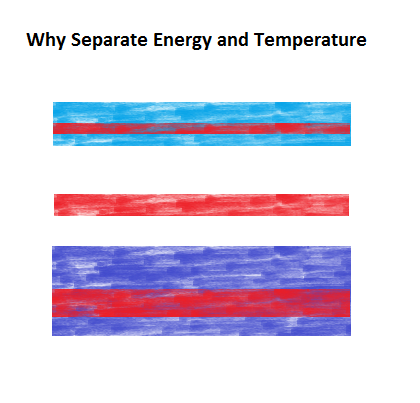 Now let's turn the power off.  The lower level which has the highest specific heat capacity contains the most energy.  That energy can only be transferred by conduction and convection.  The middle layer which has the lowest heat capacity and the highest temperature can transfer energy by convection which requires conduction and/or radiant heat transfer.  The upper layer which has half the specific heat capacity of the lowest and twice the specific heat capacity of the middle layer can transfer energy by convection, latent heat (condensation, fusion and evaporation/thawing) and radiant means.  With the power off, the energy in the red blocks is going to diffuse along the easiest paths available, typically from a warmer state, i.e. more Joules/(gram-K), until it reaches a happy medium which would be either equilibrium if no energy is lost from the system or a steady state if energy is lost or dissipates from the system or until something turns the power back on starting the process over again, which would be a "quasi" steady state.

As long as the power stays off, the solution is simple, the largest specific heat capacity controls the process internally if the system is closed.  If the system is open, layer with the highest dissipation rate controls the out flow and the layer with the highest heat capacity controls the energy flow that can be dissipated.  The system can never dissipate more energy in the steady state than the rate energy can be transferred to the dissipating surface.  This internally limits the rate of heat loss/gain and that limit is conduction/convection.

Now consider the middle layer with the lowest specific heat capacity.  Without energy being added it would lose energy more quickly to upper layer and if power is off long enough, the middle layer would shrink until it merges with the upper layer.  At that point you would have just two layers, one with 2 times the specific heat capacity or the other which dissipates energy.  The Joules/(gram-K) of the low layer controls the temperature and the Joules/second dissipation rate of the upper layer controls the rate of dissipation.  Combined they produce a temperature gradient, with boundary layers. 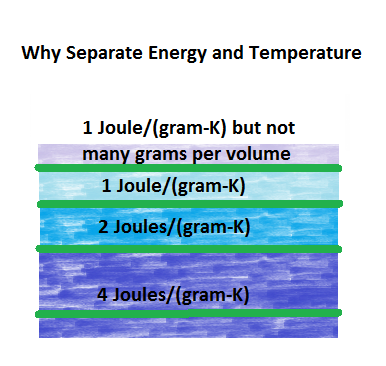 The boundary layers are thermodynamic speed bumps.  They include abrupt changes in density and latent heat.  To have an ideal temperature gradient, there would have to be an ideal density gradient and no latent heat transfer.  Since these speed bumps exist, thermoclines or temperature inversions exist.  Once the temperature inversions reduce to an absolute minimum, the radiant heat transfer to space will match the rate of the biggest speed bump, the liquid/solid to gas boundary layer.

The moral of the store is temperature without specific heat capacity is meaningless.  When some schmuck tells you that land warming will cause twice the warming of the oceans, remind him that the "land" temperature is actually lower density air with 1/4 or less the Joules/(gram-K) of the oceans which are the biggest speed bump.