There are plenty of lags in response to different forcing elements in climate for a lot of different reasons.  So many you can find about anything you like.  The volcanic forcing is one that has some pretty neat twists and turns. 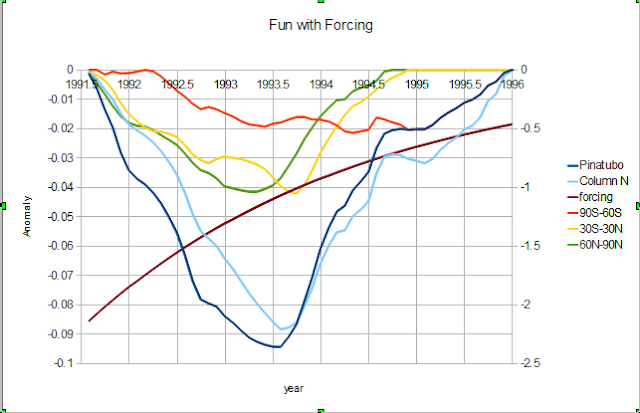 This mess is the oceans during Pinatubo.  The ERSST data is areal contribution or how much each of these regions contributed to the global sea surface temperature.  The forcing in dark red is from the BEST forcing estimates and the blue Pinatubo is just the negative portion of the global SST during the period 1991.5 to 1996.5.  That is five years and the volcanic aerosols typically dissipate in two years.  Looking at the regions you can see that 30N-90N responds first, then the low latitudes 30N-30S and then the southern oceans have a much smaller but longer duration response.  At least that is the way it looks with this baseline.  The column N is an effective forcing.  Since the aerosol forcing is estimated as a pulse with a two year exponential half-life, the effective forcing in Wm-2 would be roughly shaped like the light blue column N curve.  That is just a guestimate at this point so don't get too crazy.  So based on Pinatubo we have a roughly 24 to 27 month lag of peak response to estimated peak forcing.


Volcanic Aerosols aren't the only in play short term.  There is Solar and in addition to direct reflection of solar by aerosols there are indirect aerosol effects. 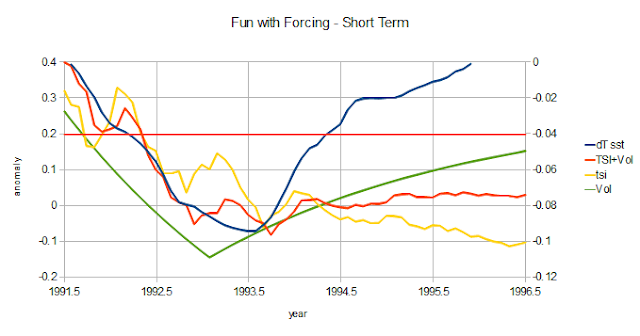 Including the  Total Solar Irradiance (TSI) anomaly you get a bit messy combined TSI + Vol forcing that doesn't fit on the exit end of the Pinatubo period.  With a lot of creative smoothing and adding some trend, the combination is likely to be a fair fit, but the error margin of the data is as large as the temperature anomaly.  Notice the mean value line for TSI + Vol which may provide a clue how much the unknown trend may be ignoring the scale on the right axis for the moment. 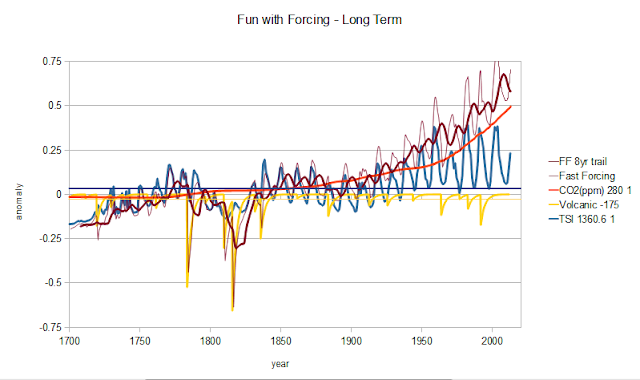 This chart has the Kopp, G. TSI reconstruction with the Best Volcanic and CO2 reconstructions or reanalysis data.  CO2 should be a reasonable reference for "normal" and the TSI variation is around another near constant reference.  Since Volcanic is set to zero, it has a mean less than zero and there is likely always some aerosol influence in the atmosphere.  There are two things that really stand out in this chart, first, using 280 ppm for "normal" CO2 the start is below zero for the "normal" for the limited TSI reconstruction time period.  Considering there was a Maunder Minimum and Dalton Minimum associated with the Little Ice age, the TSI should be either below or equal to the "normal".  Using the current best estimate of 1361.1 for the TSI average, solar would be shifted downward.  The second thing is that solar and the no feedback sensitivity are somewhat similar in slope. 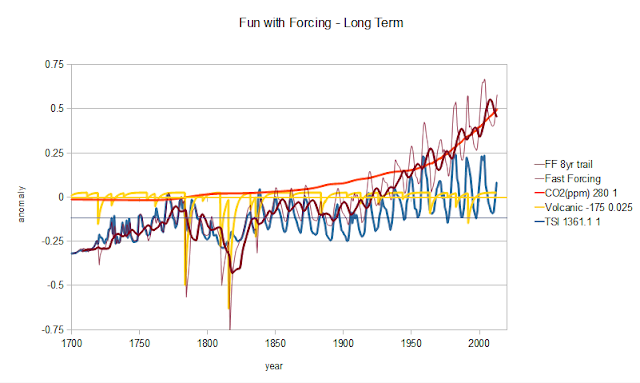 Here I have adjusted solar to "normal", CO2 forcing is "normal" if 280 ppm is "normal and made a tiny adjustment for volcanic making it "normal" for the period considered.  Unless the spreadsheet did something wonkie, the Fast Forcing is the 11 month trailing average of the individual forcing components in order to not overly smooth but allow for some settling in globally and the FF 8 year trailing allows for a longer term settling in for a larger thermal mass.  There should be some combination of the Fast Forcing and 8 year trailing that combine to a general total forcing.  The 8 year is based on personal observation and the Schwartz two compartment model which indicates an ~8.5 year lag in combined forcing. 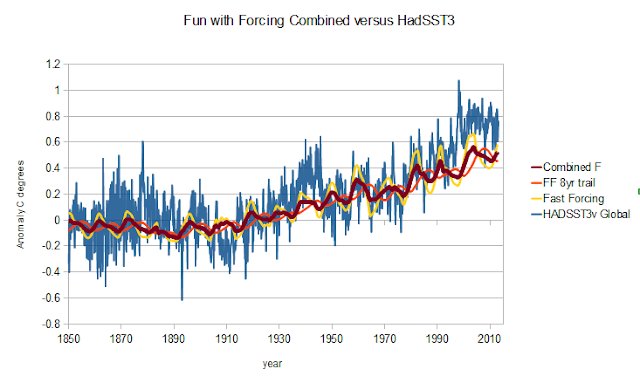 When compared to the Hadley Climate Research Unit SST version 3 data the fit is not bad.  Remember that "zero" has the least reliable data with a margin of error of 0.25C or greater plus the combined F is just these three known forcing components with no consideration of longer term lags.  If I increase the CO2 "sensitivity" to 1.5 C per 3.7 Wm-2, that would improve the fit and allow for the other atmospheric gases that have increased. 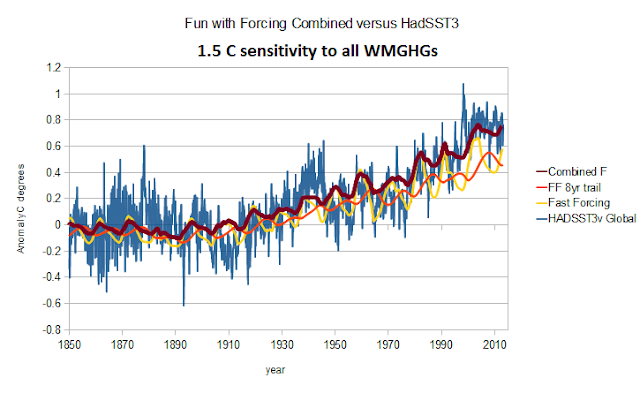 Now the fit is a little more impressive.  The FF and FF 8yr where left at the no feedback "sensitivity" showing that the change to 1.5C a substantial increase near present.  The purpose of this exersice is just to show that Solar, at least based on the Kopp reconstruction appears to have a more significant role that some have implied. 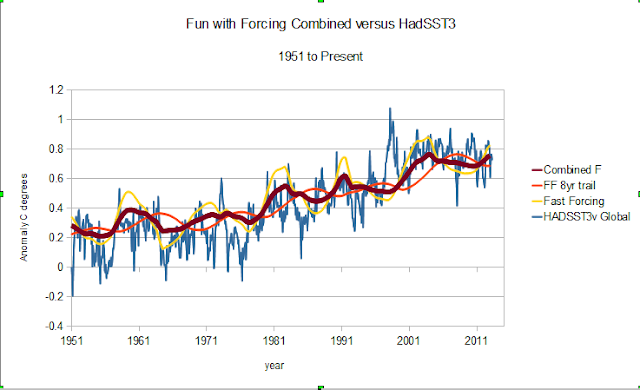 This is the 1951 to present look which is the new IPCC range for assigning blame.  There can be some adjustments made to reproduce the Pinatubo shark tooth response but since all volcanic responses are not the same as Pinatubo, that could become a little complicated with areal contributions and seasonal timing considered.  This looks to be a step closer to isolating the real solar response that tends to be underestimated even on shorter timescales. 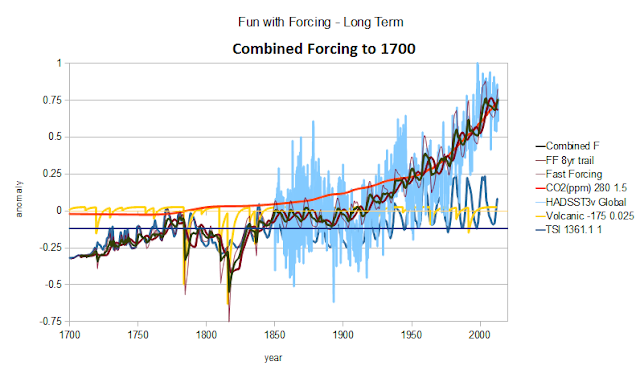 Longer term there is a bigger can of worms with volcanic and prolonged solar forcing.  Using  the combined forcing as noted, the depths of the little ice age globally was likely between 1817 to 1825.  Different regions have different response times, magnitudes and lags, but the northern hemisphere is generally more sensitive than the southern hemisphere and there is a definite difference in lag times.  Recovery from the Little Ice Age, neglecting lags greater than ~8.5 years appears to have been completed around the late 1940s.

Enough for today.
Posted by Unknown at 8:30 AM