Sol y Vol Where to Start

The biggest problem with the instrumental period is it is too short.  BEST has currently the longest instrumental record and that has issues with other influences than just Solar Volcanoes and Carbon Dioxide.  Scaling BEST to the Hadley Center Sea surface temperatures adds a lot of confusion, but it helps complete a bridge to paleo reconstructions, provided you remember the uncertainties.

Using the scaled BEST global with the HADSST3 global oceans I have a splice to the 2009 Oppo Indo-Pacific Warm Pool temperature reconstruction.  There is a pretty good fit with at least +/- 0.25 C uncertainty  in the 1850 to 1955 overlap with HadSST3.  With the scaling, the fit with BEST is as good possibly better from 1750 to 1850.  The Indo-Pacific Warm Pool is not the global oceans but it should represent them fairly well. 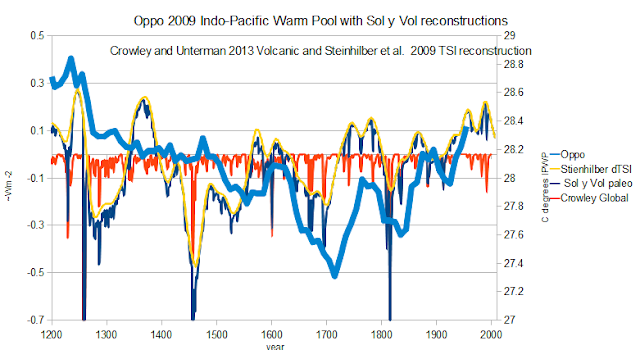 This allows me to introduce the Sol y Vol Paleo.  Unlike the sun spot number TSI reconstructions the Steinhilber 2009 dTSI is based on isotopes of 10Be and 14C which provides a surface referenced TSI reconstruction.  Volcanic aerosols impact solar radiation reaching the surface and whatever orbital influences that cause sun spot cycles could just as easily effect techtonic plate movement and volcanic activity.  It seems easier to lump solar and volcanic "forcing" together until someone can sort that out.

With this chart, Sol yVol likely started the Little Ice Age around 1240 AD.  It took about 500 years for the IPWP to cool to its minimum and so far it has taken about 300 years for the IPWP to recover.  Remember that BEST is scaled by 0.55 to make this splice meaning that warming of the land areas would be about twice the warming of the IPWP.  At the 1955 end of the Oppo reconstruction, it was still showing a weakly damped oscillation with a period of roughly 62 years.  That is the same rough period as the Atlantic Multidecadal Oscillation (AMO) which is about twice the period of the Pacific Decadal Oscillation (PDO).  In the southern hemisphere the ~62 year oscillation is muted by the more efficient mixing and can be interpreted as a centennial scale oscillation in the Pacific which if you consider a mix of  62 and 31 year recurrent recovery oscillation would appear to be a 93 year oscillation.  You can pick nearly any period that is a multiple of above or below ~31.5 year base frequency you like, if you are in to being a cyclomania.

Is this fit convincing?  That depend on on how faithful you are to your personal theories.  Given the magnitude of change is roughly +/- 0.5C degrees "Globally" in a thousand years, I doubt it much matters.
Posted by Unknown at 1:09 PM