Perspective - Ocean Energy and the Oscillations

I get criticized for taking "GLOBAL WARMING" lightly and poking a little fun with my Fun with Forcing stuff.  People have built careers around the fear of global climate change and I am not exactly good for their business.  But what the heck.  Here is a new perspective on the actual change in energy that has built a scientific industry.  This is the Extended Reconstructed Sea Surface Temperature data from NOAA who's automated website is shut down due to the current debt ceiling issue.  Other than updates, all the data is online, but they diehard global warming alarmists type scientists seem to have rushed to shut down their nonessential services to try and make them appear to be more essential.  This particular version, 3b, does not include any satellite data because the satellite data causes a "cooling" bias.  By using the satellite data I was able to estimate the absolute surface temperature of the bands then convert that absolute temperature to energy anomaly in Wm-2.  Then using the actual surface area approximation for the ocean surface in each band produce an estimate of the energy contribution to the 60S to 60N "global" oceans.  Yes, there is a tiny bit of ocean not in the 60S-60N range, but not much.

The actual ocean area of the 30N-60N band is ~46.8 million kilometers squared.  That means that band contributes approximately 14.5% of the energy to the total 60S-60N area.  Since 1900 is supposedly the end of the Little Ice Age and 1910 is approximately the lowest energy point since the "END of the LITTLE ICE AGE" I have used a 1910 to 2009, one hundred year baseline.  The least energy change is in the 30N-60N band because it has the least area.  The 30N-60N land and ocean area though contributes a larger than expected share of the total global warming and has a remarkable correlation with the Atlantic Multi-Decadal Oscillation, which of course is not a pure oscillation.  This band also includes the Pacific Decadal Oscillation, which is the noisiest of all the longer term "oscillations" and considered by some to "drive" climate.

Looking at the chart, the 30S-equator band contributes most of the energy followed by the equator-30N band and finally the 60S-30S band because they all contain more ocean surface area it that descending order.  The bands near the equator receive the most solar energy and have the best correlation with solar forcing, however, the minor 0.1% variation in the 11 year solar cycle is considered to small to have any significant impact on climate.  That 0.1% change is about 1 Wm-2 in gross terms, but since the climate scientists insist that that be divided by four, can only contribute 0.25 Wm-2 which depending on who you speak to can only produce 0.04 to 0.25C of "GLOBAL WARMING"

Using the satellite data, complete with its cooling bias, the 11 year solar cycle appears to produce about +/- 0.25 C of surface and subsurface temperature change in the ENSO regions.  There is noise in that comparison and some will deny there is any correlation at all since it does require a 27 month lag to fit, but I have seen much worse correlations being pawned off a "significant" when the mood strikes.

That energy/temperature is transported northward and southerly by Coriolis effect inspired atmospheric and ocean currents.  In the north the energy transports happens to run into a bottleneck as the ocean surface area decreases and the land surface area increases in the 30N-60N latitude zone.  The transport of the equatorial energy at nearly 30C to regions where the average surface temperature is closer to 10 C produces some amplification and the reduction in surface area limits heat loss somewhat.  The North Atlantic especially is considerable warmer than the global SST average due to Coriolis related ocean heat transport.

With all this warming and Coriolis forcing, the northern oceans have added a whopping 0.4 Wm-2 of energy to the average of the oceans.  That is about 40% of the estimated solar irradiance change since 1900.  The actual surface energy fluctuation in the northern ocean region is higher, on the order of 4 Wm-2, but equatorial and southern hemisphere energy has always been, at least for the last 5 to 15 million years or so, transported to the northern hemisphere creating a temperature imbalance of ~ 3C or 18 Wm-2.  That imbalance increasing by possibly 0.5 Wm-2 as for a "global" contribution, should not be all that exciting.  Then if you consider that the margin error of the temperature measurements in 1900 where about +/- 0.2 C and today are still about +/-0.125C, you have a cumulative potential error range on nearly 0.33C degrees.  That is close to a third of the alarming "GLOBAL WARMING".

The temporarily unemployed climate scientists in the US have managed to turn this potential increase in surface energy into a crisis to beat the band even though the "LITTLE ICE AGE" was just about as much colder as the globe has gotten warmer.  By some accounts, 1900 was not exactly a balmy year and the "LITTLE ICE AGE" may not have ended until 1950 or possibly even 1976 with the great Pacific Climate shift, that bump above zero in the green curve above.


For some reason folks just can't wrap their minds around the whole ocean heat transport part of this planet.  29C equatorial water is transported north.  That water has an effective radiant energy of about 470 Wm-2 and releases up to 116 Joules per gram of energy if it happens to make it to zero degrees at the pole where its effective radiant energy would be about 315 Wm-2 and should it freeze it would release an additional 334Joules per gram to the latent heat of fusion.  That is a butt load, (Redneck terminology) of energy that is dependent on the rate of ocean heat transport fueled by solar, tides and the Coriolis effect.  If the ocean heat transport slows down, the water is more likely to evaporate in the tropics where each gram removes 2260 Joules of energy due to the latent heat of evaporation which can be transported to the upper atmosphere and lost to space.  With all that energy being moved around, the green curve on the chart above is just a tiny fraction of the total "GLOBAL WARMING" since 1900.  Since the northern hemisphere has the largest variance it attracts the most attention.  Most of mankind does make the northern hemisphere home and we generally prefer to live on land instead of on the oceans.  That would be regional climate, the land mass where most folks live makes up less than 30% of the "Global" surface.  Oscillation in that regional climate would be either weather, macro-weather or micro-climate, but not "GLOBAL" climate, the Medieval Warm Period (MWP) was after all a regional event.

Since I have estimated the areal energy contribution of the 30 degree wide ERSSTv3b sea surface temperature data, I can de-trend that data using a 1900 to 1999 baseline and create an energy oscillation index to match the SOI pressure differential index which is inversely related to the ENSO regional index. 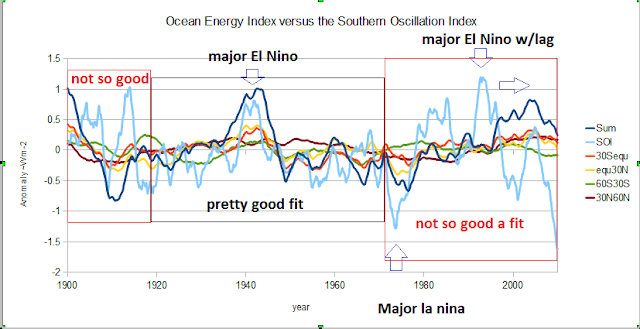 This is how my brand new out of the box ocean energy index compares with the SOI.  There is a good fit between ~1920 and ~1970.  That period would be a large portion of the SOI baseline.  Things tend to fit much better inside of baseline periods than outside of baseline periods.  So if you assume that just because the fit is so good in the time frame you forced it to be a good fit, you might get bit in the butt outside of the baseline period.   The not so good fit at the start is likely due to sparse and poor data.  The not so good fit near the end of and following the baseline period is just natural drift.  You re-baseline your weather oscillation and you can improve your weather forecasting.  The ENSO regions have migrated from ENSO 1 to ENSO 4 with currently ENSO 3.4 or 3&4 being the better region for weather forecasting.  All of the "oscillations" are manufactured using the best available data at the time to produce something useful for some unknown time period. Since the majority of the data available is not the greatest, these oscillations are used, hopefully with caution, to re-analyze and correct the more unreliable data from the past.  It should be obvious that outside of the baseline period, that these "oscillations" can be more of a hindrance than a help.  Every "oscillation" discovered in a planetary scale system needs to be considered very carefully before leaping to conclusions.  Caution though rarely generates headlines.

Just a little different perspective for the weekend :)
Posted by Unknown at 7:24 AM