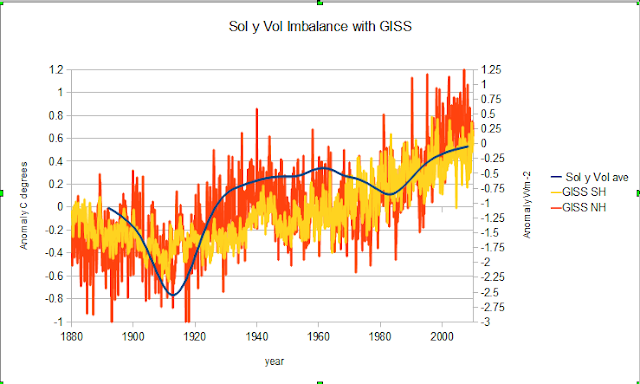 Surface temperature is not a great indication of energy change in the Earth system without considering a long enough time frame for all the internal settling to diminish to some reasonable back ground level if you are considering climate.  For weather, the decadal swings are important, for climate they are more of a PITA.  But since "surface" temperature is a majority of the data available, it has to be used.  Sea Surface Temperature is a much more reliable metric though with much sparer coverage than the ~25% of the Globe with long term land surface temperature data.

This chart compares the GISS land and ocean hemisphere data sets to the Sol y Vol imbalance or NH minus SH difference.  Since the imbalance "rides" on a secular trend the Sol y Vol was adjusted to fit the existing trend in the GISS data.  There is no easy way to determine how much the imbalance adds to the the secular trend, but this comparision shows what the imbalance can add to the variability around that trend.  This is just a rough fit since there is considerable room for in and out of phase interaction in the surface temperature averaging method.  If a baseline for surface temperature anomaly includes more or less of an imbalanced period, the seasonal signal could cause about a half of a degree error mainly due to the NH dominate land mass which should be obvious in the different variance of the NH and SH monthly GISS data.

To get the Sol y Vol imbalance used in this chart I added an 11 year centered smoothing to the Sol y Vol hemisphere "forcing" prior to differencing to remove most of the 11 year solar cycle and in the left axis is the GISS temperature anomaly while the right axis is approximate imbalance energy in Wm-2.  The imbalance energy I am sure can use a more rigorous treatment, but with the average imbalance on the order of 18Wm-2, this roughly +/- 1.5 Wm-2 imbalance estimate would be  close to an 8% variation or about +/- 0.3 C degrees.  That is about 3 times the estimated "global" temperature anomaly impact of the Atlantic Multidecadal Oscillation (AMO) which is one of several oscillations that exist due to internal energy imbalances.

This post is mainly to quiet the "global" surface temperature junkies that tend to gravitate to the noisiest of data to prove some point or the other. 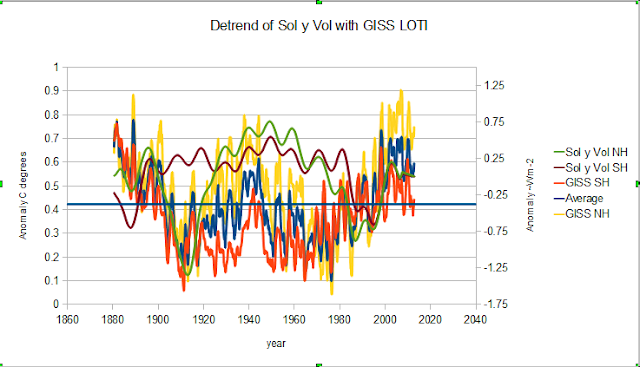 Using detrended data above you could estimate a lower effective imbalance energy.  The difference should be due to internal mixing efficiency change.  A small shift in the average westerly winds especially in the southern oceans would be more than enough to account for the discrepancy (Toggweiler 2009).