I have mentioned that the Extended Reconstructed Sea Surface Temperature (ERSST) version 3b no longer uses satellite data due to a cooling bias issue.  You know we just couldn't have cooling bias issues trying to prove how much CO2 is warming the world.  After spending billions on satellites, it kind of sucks that they can't show as much warming as the meticulously maintained global surface temperature record.  So about how much bias is there and why? 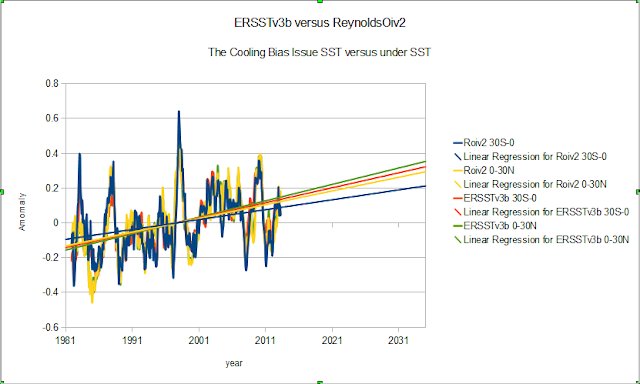 This compares the Reynolds Optimally Interpolated version 2 SST data to the ERSSTv3b data.  Both the 0-30S and 0-30N Reynolds data sets indicate less warming than the ERSSTv3b data.  The discrepancy is supposedly due to atmospheric water vapor.  Saturated water vapor looks pretty much like just plain water to the satellites.  I let the axis extend to 2035 just so you can see the rough impact in the future if nothing changes. 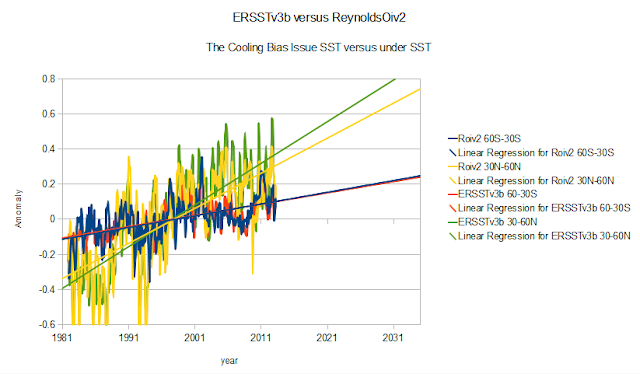 In the mid latitudes the bias is worse or better depending on your perspective.  The trend lines for the Reynolds data are rock solid so if you are looking to analyze oscillations the Reynolds data would not be nearly as much fun.

This next chart is apples and oranges but fun anyway.  It compares the high latitude Reynolds SST to the ERSSTv3b combined land and oceans. 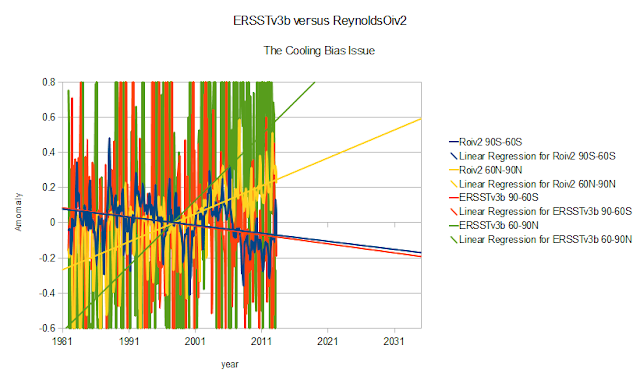 Since the Southern Hemisphere doesn't have much land in the 60S - 90S range or atmospheric water vapor, the Reynolds and ERSSTv3b agree very well.  In the Northern hemisphere you cannot say the same thing.  Lots more oscillation opportunities in the NH for them so inclined.   These are the smallest bands so "Globally" they shouldn't have much impact on total energy.

If you want to duplicate these charts, you should know I used a 2001.90 to 2012.90 baseline to remove the seasonal cycle for the Reynolds data.  Baseline selection makes a big difference.
Posted by Unknown at 9:56 AM