Probably the trickiest part of determining the impact of hemispheric imbalance is dealing with the amplification of the surface temperatures used as the primary metric.  On the whole the data is remarkably accurate and well organized.  What the data is supposed to represent versus what it actually indicates is a bit of a problem though.  The surface air temperature is measured approximately two meters above the ground surface at an average altitude of ~680 meters.  The less dense air tends to amplify the variability plus there are many more land issues than ocean issues.  Most of the warming is over land and in the northern hemisphere oceans at first glance, but both the land and the NH oceans due to the bottleneck between latitudes 30N and 60N tend to amplify overall temperatures. 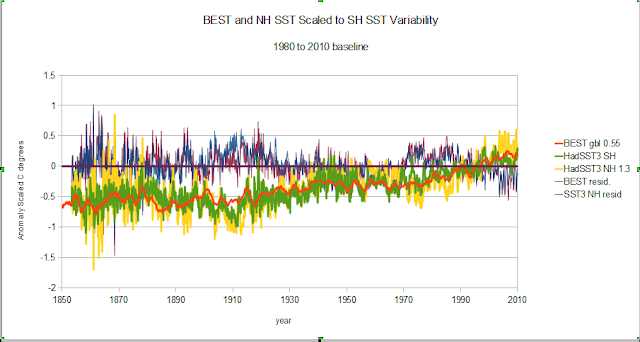 To isolate imbalance impact that amplification has to be considered.  This chart uses the BEST and Hadley Center Sea Surface Temperature on a 1980 to 2010 baseline to scale the data to a Southern Hemisphere reference, HadSST3 SH.  The BEST global requires a scaling factor of 0.55 meaning it is amplified by 181% or nearly doubled and the NH SST needs a 1.3 scaling factor since it has not warmed as much as the southern hemisphere.  The residuals of both BEST and HadSST3 NH minus the SH reference are used to "zero" in the gain.  Since the BEST data is so noisy I use a 27 month smooth to simplify things.  Because of the sensitivity differences that cause the varying gains, this scaled version should improve estimation of the actual energy imbalance required to produce the fairly large natural internal variability.  It takes a lot less energy to create large swings in temperature because temperature is not really a very good way to determine "energy" imbalances.

The well mixed Southern Hemisphere oceans do have an advantage in the surface temperature metric department with less "active" land mass to create noise.  The Antarctic and moist tropics land masses are much more stable than the NH especially the 30N to 60N region.

I am sure there will be a few questions on this scaling, but the Toggweiler Shifting Westerlies paper mentions how much impact on surface temperature a shift in the Inter-Tropical Convergence Zone (ITCZ) can have when compared to CO2 forcing.  There have been quite a few issues created by ignoring internal variability and "amplification" due to inconsistent regional climate "Sensitivity" that will prove to be rather embarrassing sometime in the near future if my thoughts are correct.
Posted by Unknown at 8:59 PM