33 C degrees is the difference in the theoretical temperature of a surface receiving 240 Wm-2 and emitting 390 Wm-2. 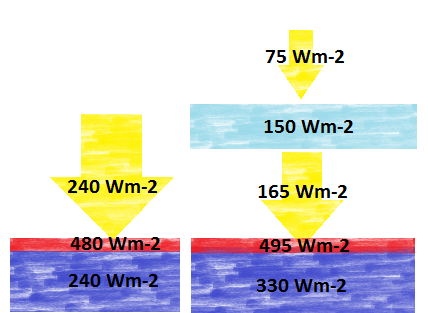 It is a bit confusing because it is a apples and oranges comparison. The Yellow arrow is a flow of energy and the blocks have heat energy stored in a thermal mass.  The units Wm-2 are derived from Joules/sec for the energy flux and the units for the blocks are actually Joules/gram.  If there were no mass there would be no energy stored.  So mass matters.   On the left is a single surface interaction layer. The larger blue layer represent a surface "thermalized" to exactly its available input energy flux.  Once a mass is thermalized, i.e. is warmed it capable of emitting radiant energy.  How much radiant energy it can emit depends on how much energy it can transfer to its surface.  Inside of the mass, there is no real radiant transfer, there is only radiant transfer at all the surface boundaries of the bulk of the mass.  When radiant energy is added to a bulk mass that is radiating energy, the gross energy flux combines to an effective energy equal to the out going and incoming energies.  On the right hand side is a two layer example.  The same energy is applied, but thermalized is separate layers that can interact allowing more energy to be thermalized.  That "surface" or lower bulk has more energy per unit energy applied than the single interacting layer.  The accumulated energy of the mass in both cases depends on how efficiently the available energy can be converted into heat and stored as heat.  Mass matters and the type of mass matters.

In this example, the second interacting layer increased the lower surface energy by 15 Wm-2 and the lower bulk thermalization by 90 Wm-2.  I did not include a radiant surface for the second layer, but with it thermalized to 150 Wm-2 and 75 Wm-2 of energy applied it would have a gross radiant surface of 225 Wm-2.  The 15 Wm-2 additional lower surface energy plus the 225 Wm-2 upper layer effective radiant energy of 225 equals 240 Wm-2 indicating the surfaces are balanced or in a quasi-steady state.

The 33 C approximation assumes the left and has the right.  That is not a problem, 33 C is just a reference for describing the change in efficiency produced by a combination of atmospheric and ocean interactive effects.  Saying the 33 C is purely due to CO2?  Now that's a problem which causes a lot of circular arguments.

For example I can take the single layer on the left and say that the surface should be 480 Wm-2 not 390 Wm-2 so there 90 Wm-2 of cooling due to the atmosphere.  That happens to be entirely true, evaporation removes ~90 Wm-2 from the surface and transfers it to the second layer on the right hand side.  I could make the entire debate about water and consider everything else "negligible" with respect to water/water vapor simply by changing my frame of reference.  As long as the final solution works out, there is absolutely nothing wrong with alternate frames of reference.

At some point in time though, all of the interacting layers have to be included until it can be shown that they are truly negligible.  There is no "And here there was magic" allowed in thermodynamics.

By the way, that 15 Wm-2 difference is about 2.7 C degrees of uncertainty for the guys that like the 33 C illustration.

With the Solar Forcing with multiple lags you can explore some of the impacts of layer interaction in a black body cavity.  Fun with Forcing II 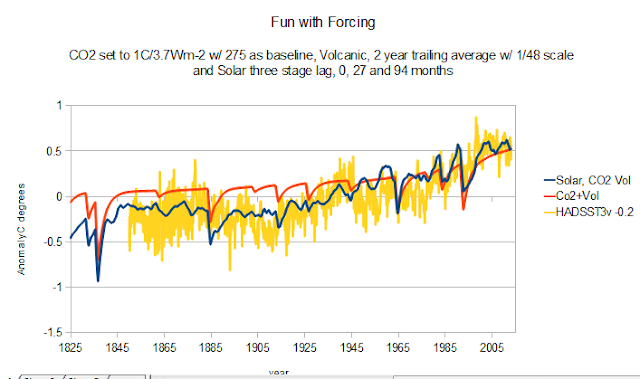