It's Complicated - That is Why They Call it CHAOTIC

Most folks have not problem at all understanding that "weather" is chaotic, i.e. has lots of turbulent mixing interactions.  "Climate" for some reason is assumed to be less chaotic, because it takes longer.  You get a glimpse of "climate" on what you think is a reasonable time scale and start thinking you can figure it out because it looks so simple compared to "weather".  If "weather" is unpredictable say 10 days in advance, a climate "day" may be 10 times 60 years = 600 years.  If you are only looking at 120 years worth of data then you only have one fifth of the information you need to leap to conclusions. 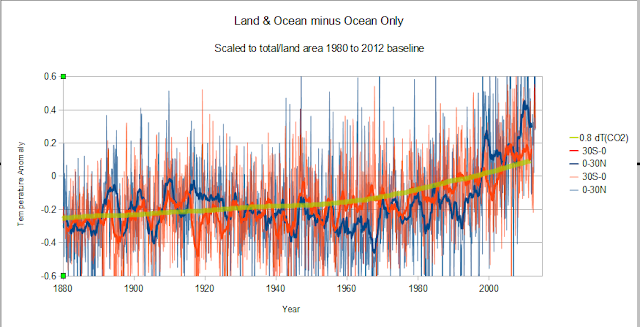 Hopefully, this is a simple enough example to show what you are up against.  This uses the ERSSTv3b data for the extended tropical bands, 30 degrees to the equator.  Each of the two band include ~25% of the global surface area.  The northern hemisphere band contains more land area than the southern.  So after differencing the land & Ocean combined data from the Ocean only data you have a "weak" signal that needs to be corrected for areal differences.  The average land to ocean ratio for these bands is 1 to 4 so to isolate the temperature difference you must multiply by 3.49 for the NH and 4.36 for the SH.

Differencing removes a large amount of the common "noise".  Then I smoothed each data set with a 27 month moving average, just over two years to allow for seasonal variations, to make things a little less "noisy".  As you can see the two hemispheres have different responses with different lags.  It may take 20 or more years for an imbalanced response to settle back to "normal" with one hemisphere alternately dampening and amplifying the settling curve of the other.  Over twenty or so years "mild" disturbances zero out, but larger disturbances that impact the greater thermal mass of the deeper oceans may take centuries or longer to zero out.  The longer lags may only be a few tenths of a degree, but if you are trying to predict "climate" to a few tenths of a degrees, you are stuck with another significant source of "noise".  Since the ~25% of the bands are land surfaces which amplify the "noise" by a factor of 4 you get ~0.4 C of "noise" that may be irreducible on realistic time scales.  There is just as much chaos in the data as there is in the system.  The tighter you make your tolerances the worse the data "noise" becomes.

I added a CO2 reference curve to the chart for, wait for it, a reference.  Now watch this closely. 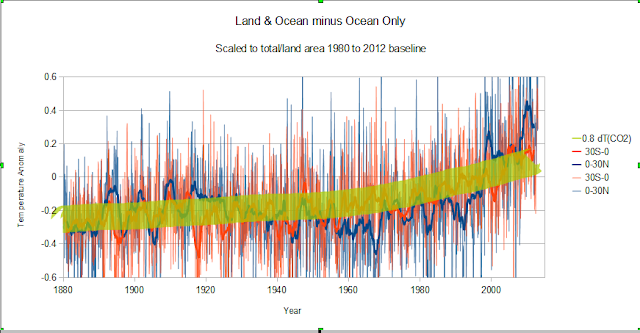 This chart was the width of the CO2 reference expanded to roughly the claimed margin of error of the temperature data sets.  That is probably the most realistic precision you could ever hope for in this "noisy" combination of system and data.  Imagine that, the lower "no feedback" climate sensitivity estimated by the skeptical low ballers, Lindzen, Spencer and Kimoto seems to make sense.  I wonder why?
Posted by Unknown at 8:50 AM