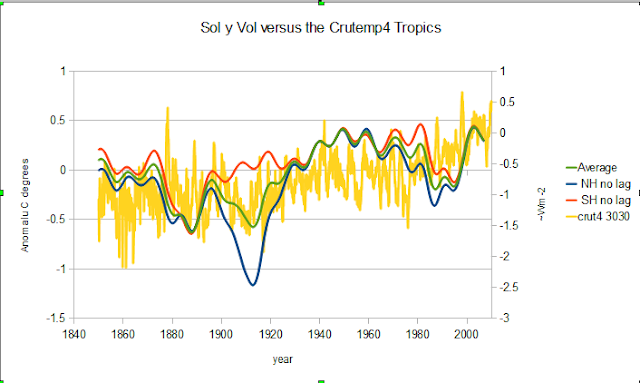 Most of Climate Science is over simplifications of extremely complex combinations of processes.  There is an old joke about a mechanic that looked at a car engine, took out a small hammer and tapped a part under the hood.  That fixed the problem so the mechanic charge the car owner $50 bucks for the repair.  The owner complained that was a lot of money for a single tap.  The mechanic explained, "It's not for the tap.  It's for knowing where to tap."  The tap just freed some mechanical part allowing it to function as it is supposed to.  Vibrations and perturbations tend to reset parts of system so they can begin to do the things they are supposed to do.  If you just look at the "forcing" you may not notice that the brakes are locked.

The chart above compares the Sol y Vol hemispheric imbalance described in this link with the Hadley Center land and ocean extended tropical surface temperature estimates.  If you are just looking for a gnat's ass fit you will miss the in phase and out of phase regions where system efficiency would shift from one mode to another.  In an imbalanced mode, the mixing of the system changes so that the oceans may store more or less energy.  If the oceans store more energy, the surface temperature would tend to decrease along with any decrease that would be indicated by pure "forcing".  You don't get the same response in a balanced phase as you would in an imbalanced phase.

Since different regions of the globe have higher mixing efficiencies, those regions would have a faster ocean response and slower atmosphere response than regions with less efficient mixing. This is especially important for simple radiant models of "forcing".

Internal mixing is mainly anisotropic or horizontal instead of vertical.  Radiant models are general up/down dominate with poor consideration of anisotropic energy transfer on longer time scales.  It can take twenty years or more for an imbalance between the hemispheres to settle out to a value close enough to zero to be ignored, especially if the Climate Scientist is looking for that gnat's ass level of precision.

Once the Climate Scientist believes he/she has found that level of precision, if they did not account for the impact of natural internal variability, their work is likely to be a "Crock of Shit" to use a fairly new Dendroclimatetology term.  This series is going to attempt to avoid that status by offering "envelopes" of possibilities. 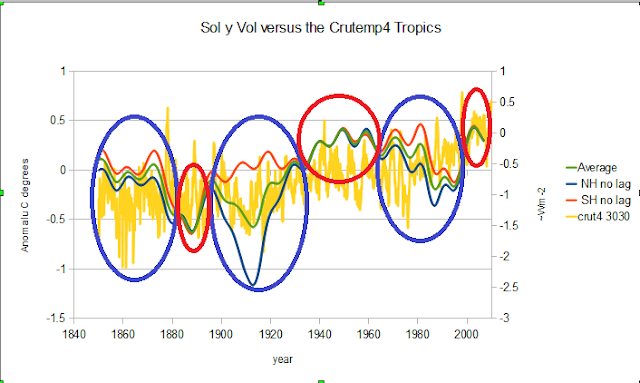 These would be some of the envelopes.  This by the way is not a particularly novel approach.  There are dozens of previous works that deal with non-linear systems.  This is more intended to be an Eye Opening approach so more Climate Scientists can avoid the Crock of Shit results :)