With the validity of temperatures trends being questioned the debate turns to Ocean Heat Content (OHC).  This is the area of the famous "missing" heat. 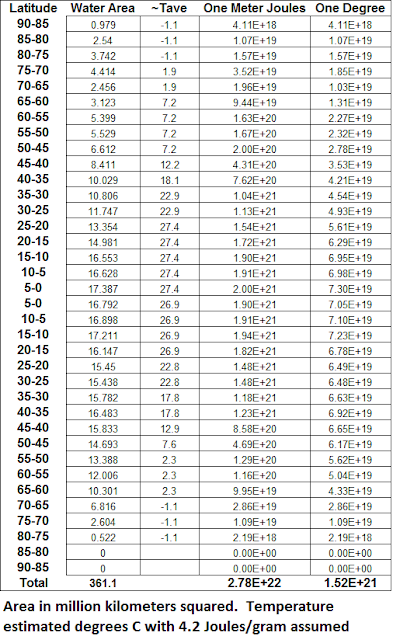 This table is estimates of the ocean by 5 degree latitude bands.  The Tave, or average temperature is from one of Bob Tisdale's charts posted by Roger Pielke Sr. when examining SST by latitudinal band.  Since the bands I am using are not the same as Bob Tisdale was using, this is an estimate.

The Water Area is in million kilometers squared (km^2), there are one million cubic meters in a km^2 of water one meter deep, there are one million grams of water in a cubic meter of water and this chart estimate 4.2 Joules per gram per degree C.  For negative temperatures, 4.2 is assumed to zero C degrees.  Above zero, each degree adds 4.2 joules per gram.  This is an estimate since salinity does impact the heat capacity and the 4.2 J/g varies with temperature.  This determined the One Meter Joules value.  The One Degree column is a "what if" temperature uniformly increased by a degree or the impact of one degree temperature change per 5 degree latitude band.

The top one meter of the oceans would contain roughly 2.78 E+22 Joules.  So to estimate the heat capacity of the upper mixing layer, should that be 100 meters thick, multiply by 100.  A simple tool to put in your bullshit detector toolbox.

While I have briefly checked the values in the table, I haven't gone nutz since there are several estimates made that I would like to make more accurate.  For general BS detector use, it appears to be close enough for government work.  Should anyone note a glaring error, let me know, but this is basically a rough draft from an ongoing project.

Like using the data to "see" global heat capacity.  Like here, the oceans are biased to the Southern hemisphere but the energy of the oceans is more uniformly "balanced" between the hemispheres.  I could use this base estimate and use decadal variations temperature by latitude to show the shifting balance.  That would be the climate "shifts".  The resistance of the atmosphere to radiant heat loss would change with the shifting internal "balance".  Since the southern hemisphere has the thermally isolated Antarctic, that "window" to space is more open.
Posted by Unknown at 7:55 AM