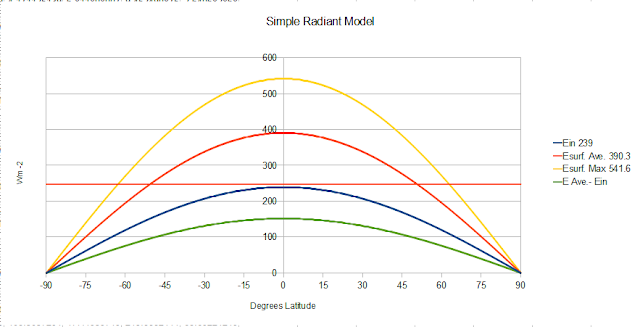 Living on a close to spherical rock wandering through space we oddly have a flat perspective of the universe whizzing around.  Being able to visualize not only what we "see" but what nature "sees" requires a little imagination.  Communicating that vision in two dimensions is more of a challenge.  Simple models help.

Above is a simple radiant model.  Like all models it is not perfect.  The Earth is not a perfect sphere, so using the "average" would produce some error.  This model uses a simple cosine of latitude to show what energy visiting the Earth may "see".

The best estimate of the average solar energy available to Earth annually is ~239Wm-2, if that energy is uniformly distributed across the true surface of the Earth. The average energy available at the Top of the Atmosphere (TOA) is roughly 341 Wm-2.  Between the TOA and "true" surface, there is a lot of stuff going on, so how much can a simple model tell us?

By plotting the weighted average, or the 239 Wm-2 times the cosine of the latitude, we have the blue curve.  Averaging the blue curve produces 151.3 Wm-2, which is roughly the magnitude of the "Greenhouse Effect".  Adding the 151.3 Wm-2 to Ein, 239 Wm-2, results in 390.3 Wm-2 or the estimated average Stefan-Boltzmann equivalent surface energy.  Just using this simple model we can arrive at a very close approximation of the "Greenhouse Effect". No smoke, no mirrors, just a simple radiant model.

When I posted the Simple Regulator Note, I mentioned that visualizing the same type of shape in the atmosphere would be a little difficult for some.  The cosine curve in the plots are just a smoothed version of that simple regulator.  Energy applied at the equator, the peak of the curves, has to migrate toward the poles.  The resistance to flow of that energy by latitude would roughly follow the curves.  It is harder to exit from the equator and easier to exit at the poles.  Think about it, then you can bookmark this simple radiant model to impress your friends.
Posted by Unknown at 6:56 AM