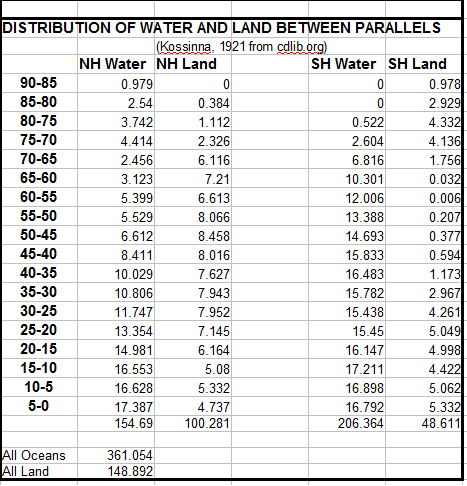 This is revision of a copy of the Kossinna 1921 Distribution of water and land by 5 degree parallels from the link cdlib.org.  The values are in million kilometers squared.

Unless I have transcription errors, this the data from the North Pole to the south.

Lots of land up here.


Lots of water down here.

Between latitude 40S and 60S, there is 23% of all the global ocean surface area and 1.6% of all the global land surface area.  Since the oceans have much greater thermal mass that land, nearly a quarter of the thermal mass of the globe is confined to this 20 degree band of latitude.  This happens to be the home of the Antarctic Circumpolar Current.

A five degree latitude change in the ACC path caused by atmospheric circulation patterns and/or change in the sea ice extent would impact global climate significantly.  No need to think albedo forcing, just simple thermodynamics.  This area is the window to the thermally isolated continent of Antarctica with an average annual temperature of around -30 C degrees, where an area the size of the continent of Australia changes from open water to sea ice every year. 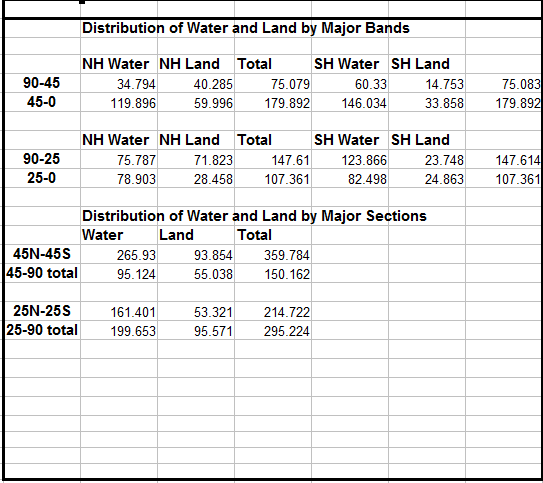 Email ThisBlogThis!Share to TwitterShare to FacebookShare to Pinterest
Labels: reference