There Core of the Problem - The Abysmal Depths 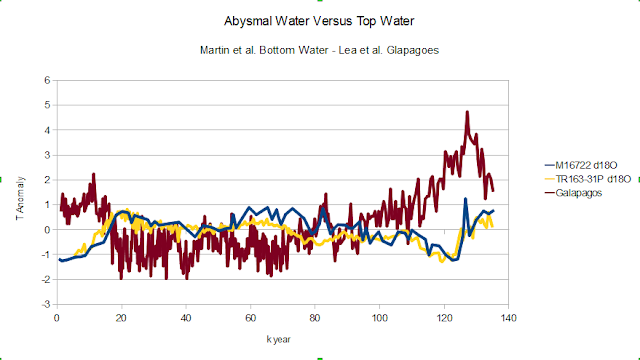 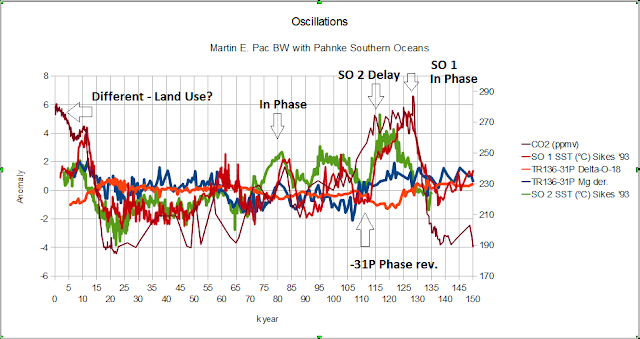 This chart should be easier to understand.  Since there were questions on the P. Martin 2002 data and how I manipulated it, here is another post explaining things.

The initial shock of a perturbation drives the SST up and the SBT down.  Both decay to "normal" at different rates.  In this slice of history, approximately 40,000 years was required for the SST to "settle" ~4 C while the SBT required ~36,000 years to "settle" from ~1C depressed temperatures.  It took approximately 4,000 years for the SBT and the SST to reach a "conditional" equilibrium where both "settled" in unison.

These delays and decay periods are probably the most difficult issues with climate to resolve.  With a slow rate of change in "unforced" conditions, the return of SBT to "normal"  would have approximately a 1.25C impact on climate.  Since the decay is not perfectly "dampened", overshoots of "normal" would produce climate oscillations or "unforced variations".  Should these natural, "unforced variations" be out of phase with the Milankovic cycles, not each Milankovic cycle peak or valley would produce the same response in the climate system.
.
So for the skeptics in the crowd, that is just about as simple as I can make this particular point about non-linear fluid dynamics, Thermal Inertia is a Bitch.