One of the Denizens noticed that a plot of the Martin et al. 2002 data I had plotted against the EPICA CO2 data appeared to be different than published in the paper.  I have not been been paying much attention to the papers with respect to calculations of sensitivity and accuracy of the temperature calculations for the proxies.    Since I am looking for the timing of events and the response times, the margins of error are not a particular concern at this time since I am not worried about magnitude.  Still, there are quirks in software packages and operators.  So this is a closer look at the Martin et al Mg derived bottom water temperature data.

This is the data for the TR 163-31P tropical pacific core that I have been using.  Since there are inconsistent datings for the delta O-18 and the Mg derived temperature, there are blanks spaces in the data series at different times.  Just plotting the data "as is" I get the relationship above.  There are points in the curves where the two sets are in phase and points where the two sets are out of phase which is what I am interested in, the changing phase relationship.  I am using OpenOffice with the xy shatter and line only, so the individual data points are not shown. 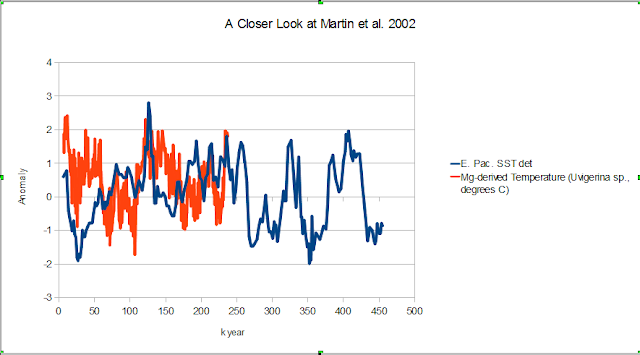 In this chart, the Martin data is plotted with the Herbert et al. tropical eastern Pacific.  When comparing the two, the range selected for "average" when converting the data to anomaly can have a large impact on the relationships.  In this case the tropical E.pac. SST is based on 455k "average" anomaly.  Since there is a large gap in the Herbert et al. tropical Atlantic data series beginning ~455ka, that is a convenient period for that data set.

In this chart, I am showing the anomaly I have calculated for the Martin data.  Since I am using the full period of the Martin data, the anomaly I calculate is a little different than their data.  Again, since am not attempting to slice temperatures, that small difference is not major deal nor is the fact that the "average of the Herbert data is based on a longer time period.

This is the chart where the Denizen had his questions about the data.  First, M16722 d18O is from the Atlantic bottom water data sheet downloaded from the NOAA Paleo site.

This chart is the Martin Atlantic d18O and Mg derived temperature with the EPICA CO2.  A little messy but no anomaly calculations have been made.

This is the same d18O versus EPICA CO2 with no anomaly adjustments made.  Other than different axis scales, I don't see any serious issues.

At times I do attempt to interpolate sections of data that is missing, but as far as I know I have noted any fiddling with the data and even provided warnings if is was a really funky experiment.  In is nice to know that others are watching because every one screws up.  I this case, I don't see were I may have though.
Posted by Unknown at 9:25 AM