Promotion to Fraud and Buffoon

It appears that anyone that tends to not believe than CO2 alone has the power to drive climate requires a name.  Denier or Skeptic are the common labels for the general "non-believers" of the CO2 faith.  Clown and Crackpot are used by some for the more vocal groups, but Fraud and Buffoon is a badge of honor for the seekers of natural internal variability it appears.

Bond Events and Dansgaard-Oeschger Events are millennial  scale climate events of not well known cause.  Solar cycle variation, a forcing, has been considered the most likely cause of the events.  With satellite data of the variations in the solar energy in place, the likelihood that solar alone causes these events is questionable,  attention has turned to internal sources of the pseudo-cyclic events.

When I produced this chart of data for deep ocean core samples compared to the Antarctic EPICA CO2 concentration, I was awarded the Fraud name.  I do have an error in the chart, the left axis Degrees C should be Anomaly.  Delta18O isotope data is inversely correlated with temperature.  In this chart I was comparing the timing of events, not the magnitude of response to events, so it did not impact my conclusions, but an error is an error and anyone making an error is a Baffoon.  By saying the orientation did not matter I was promoted to a Fraud.

The chart, which is intended for another post that has not been published, is one I shared online in a discussion of the impacts of internal decay following impulse perturbations  the A, B and C events circled on the chart.  The path of the three series plotted become synchronized during these events then settle to a new state with different trajectories until the next perturbation or event.  The gap between the different plots between events, which varies is the item of interest. 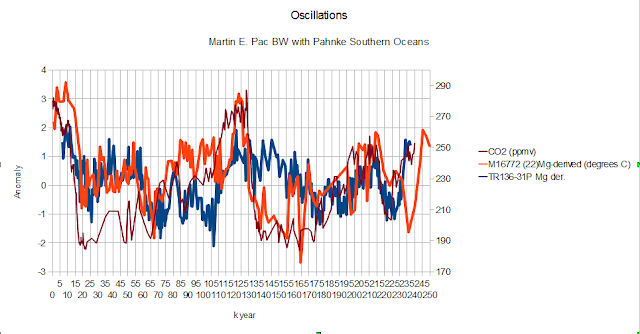 This plot uses the bottom water temperature derived from Mg/Ca ratios (Martin, P.A., D.W. Lea, Y. Rosenthal, N.J. Shackleton, M. Sarnthein, and T. Papenfuss.  2002. Quaternary deep sea temperature
histories derived from benthic foraminiferal Mg/Ca. Earth and Planetary Science Letters 198 (2002), 193-209.), which was updated in 2006 shows the same divergence of the bottom water data from the EPICA CO2 data.  The orange curve which is for an Atlantic Ocean core more closely matches the CO2 than the blue Eastern Pacific Core.  Both curves have periodic pulses in the settling time frame and different "approaches" to the perturbations.  One of the more interesting points is ca 70ka where the orange and blue become somewhat synchronized and diverge from the red CO2 curve.  Some, including myself, are of the opinion that where CO2 the "primary" forcing in this period of low solar forcing, that the bottom water data would tend to uniformly follow CO2, not diverge into an inverse relationship.

This chart of estimated Lake Tanganyika Surface Temperatures by Tierney et al. 2008 available on the NOAA Paleo website, shows three recurrent pulses and an estimate of the solar cycle during that time period.    That implies that Solar shifted the pulses but did not cause the pulses.  The average length of the pulses is ~4300 years which includes roughly three of the Bond or D-O event cycles each, though some are more pronounced than others.  With no obvious external forcing of the pulses, they would likely be internal oscillations that at their peaks, produce on the order of 2C variation in temperature at Lake Tanganyika.

Because of the difference in thermal mass of the Northern and Southern Hemispheres, the pulses would have differing impact on surface air temperatures.  A one C pulse near the southern pole could cause a four C temperature pulse at the Northern pole with ~2C in the equatorial regions being the "average" global impact.

These millenial scale oscillations are being studied by a number of scientists, Lloyd Keigwin with WHOI, Lowell Stott with USC, and quite a few others.  The individual that gifted me with the "Fraud and Buffoon" title is not one though :)

So I am just going to proudly move forward attempting to use chaotic pattern recognition to isolate the sources of these "Events" undoubtedly making quite a few mistakes along the way.
Posted by Unknown at 7:22 AM