The missing Medieval Warm Period is being discussed yet again over at Climate Audit.  Since I have Bintanja and ver de Wal 2008 data which was meticulously calibrated to "today's" relative values, I thought of a quick post. 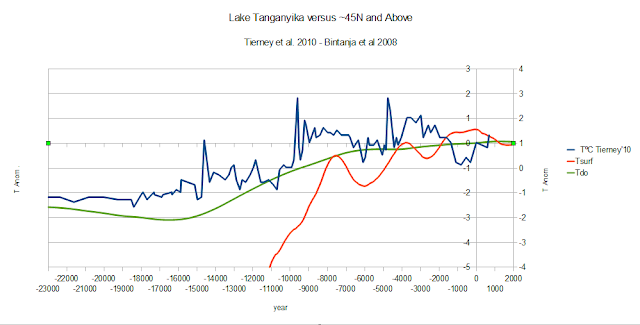 This chart has the Bintanja and van de Wal (BW) discussed briefly here with the Tierney et al 2010 data for Lake Tanganyika available at the NCDC-NOAA paleo website under Africa.I have two axis offset by 1 degree with the Tierney data  in total period anomaly shifted downward.  The Tsurf, is the surface temperature for ~45N and above and Tdo is the Temperature of the deep ocean.  The "deep ocean" temperature and the Tierney reconstruction are close to in phase while the Tsurf is "hunting" a new set point. 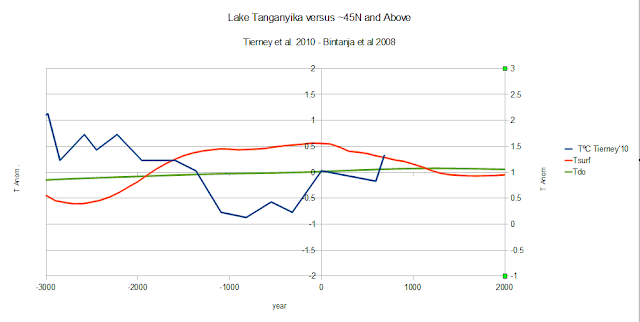 Focusing one the past 5,000 years, the Lake tanganyika data is now in the "hunting" mode out of phase with the Tsurf data.  The Tierney data ends at ~650AD, but the up slope would coincided with the MWP  Summing the two "waves" the MWP would be warmer followed by a cooler period, the Little Ice Age.  Changes in "forcings" would "ride" these oscillations and if the forcing were strong enough, "reset" the cycle of oscillations.  For completeness, 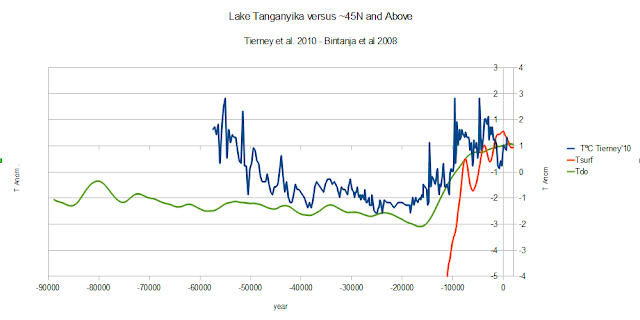 this is the data from 90,000 BC.  The Tierney data stops at ~60ka BC which is one of the more interesting periods of the internal oscillations.  In this case, both the BW and Tierney data would be in phase with CO2 concentration.  Notice how Tsurf is 5 degrees below "today" at roughly 11ka BC. 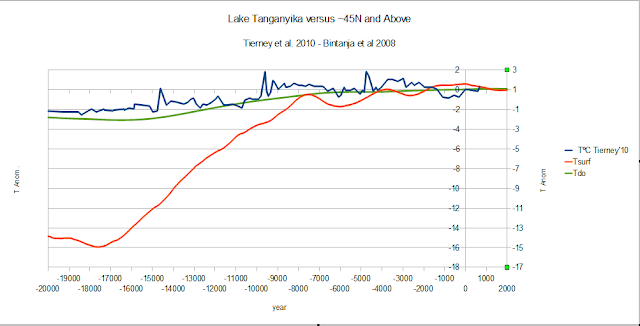 The Tsurf bottoms at -16C relative to "today" just before 17,000 BC.  BW estimate that the average temperature of the ~45N to pole area of the "Globe" was 16C degrees lower than today.  This "regional" temperature depression was due to huge ice sheets in the high plains of the "high" latitudes, or latitudes north of 45N.  Those high plains or steppes are farmland today and it took several thousands of years for the ice sheets to expand over the high plains without man clearing snow with plows, ash, peat and manure spreaders or in the case of some enterprising Russians, Mig jet engines mounted on tractors.  If you want to blame man for warming, industry and agriculture above 45N would be the place to point.
Posted by Unknown at 6:49 AM