"Global" versus the Oceans - Part Four

From the original installment, the "Global" versus to Oceans series has been intend to show the impact of the Antarctic Continent and Circumpolar Current on Global climate and magnetic orientation.  The potential instability of Antarctic Ice sheets to orbital and tidal forces can impact orbital and tidal forces.  A complex set of tens of millennial scale climate related geophysical interactions.

The Scaled EPICA CO2 and the Baseline provided by Bintanja & van de Wal provide a "standard" for comparison to various regional reconstructions of past ocean climate.

This series of comparisons adds the Herbert et al 2010 South China Sea SST anomaly and Eastern Pacific to the "standards".

The period from ~800ka to present is tame compared to the more distant past.  The next chart shows the most recent magnetic field reversal. 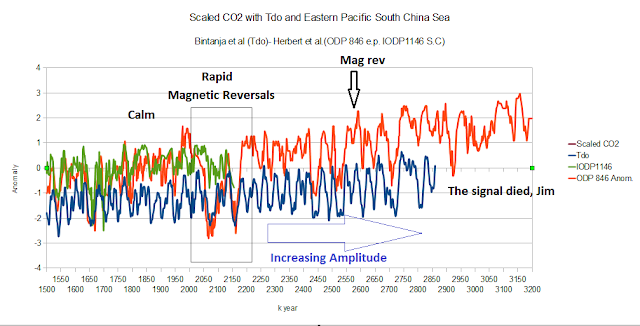 There are many gaps to fill, but the use of the Scaled CO2 and 45N temperature of the deep oceans provides an interesting perspective of past "climate".  One of the more interesting is that it is unlikely that there is a single "sensitivity" of climate to carbon dioxide.  Then relative calm of the past 800 k years would indicate more sensitivity while the beyond 800 k years could produce any sensitivity one wished to find.  Since the 45N remains more closely related to CO2, it is very likely that land based ice has the greatest control over CO2 and Southern Ocean mixing the greatest control over land based ice.  At least, CO2 is less likely to influence geomagnetic field reversals than huge Antarctic Ice Sheets.

Note:  While I have reviewed the "Global" versus the Oceans posts, there are always chances to improve and correct.  Any volunteer review comments are always welcome.
Posted by Unknown at 7:28 AM