Can Climate be Predicted?

Where I differ most with other "skeptics" is in the predictability of climate.  While far from perfect, climate models are useful "IF" the anomalies or misses in the model projections are carefully considered.  Denial of natural internal variability or the assumption that the meaningful duration of climate internal oscillations is small is poor modeling practice.  The climate and the models will diverge, figure out why. 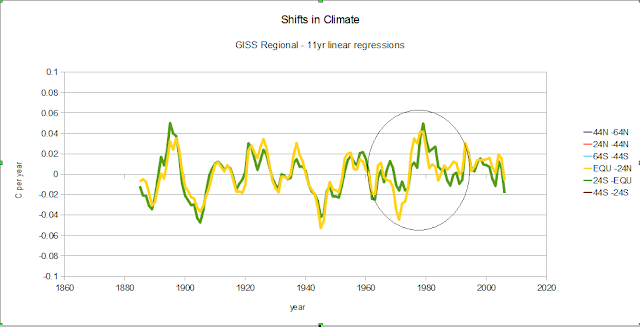 The Kmart change point analysis, while still crude, is pretty useful.  Above is the GISS tropics, the best indication of applied energy from the sun.  This plot shows one obvious anomaly, the tropics shifted in response of solar energy input.  The 11 year linear regressions in this case are centered.  With this orientation, climate "shifted" roughly in 1971.  There is also an interesting anomaly around 1920, an "M" which is an indication of a saddle node perturbation. 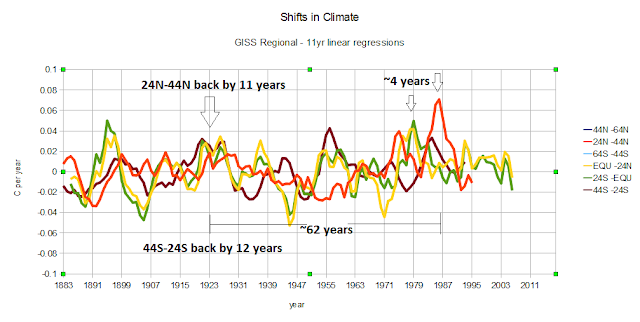 Just like the easy to "see" peaks, the "M" signature is easy to follow.  Here the next latitude bands, 24-44 are compared to the tropics or equatorial bands.  By shifting the 44S-24S band back in time by 12 years, the "M" aligns.  The shift in the 24N-44N band required 11 years, but exact timing is likely misleading because of the coarseness of the annual data.  Since the 24N-44N band has less ocean and more land area, the signal is amplified relative to the southern band.  There is though a noticeable difference in the settling times where North took 62 years and South settled more quickly, by approximately 4 years. 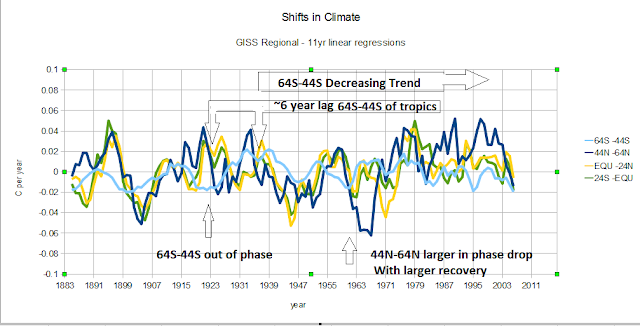 Since the thermal mass difference is greatest the further removed from the Equator, this chart shows more clearly phase relationships that impact climate.  The 64S-44S latitudinal band is the most stable of any of the bands due to the thermal mass, ocean percentage, and efficiency of the Antarctic Circumpolar Current.  This band was out of phase with the "M" perturbation in the tropics so it lagged the perturbation by about 6 years.  The 44N-64N has very low thermal mass relative to its southern cousin, so it responds very differently.  The "M" is not easily noticeable in the northern latitudes.  The oscillations, both short and long term, are more stable in the southern oceans providing a degree of predictability due to the much larger thermal mass which would have much larger thermal inertia.

Between the obvious peaks related to shifts and the more subtle saddle node "M" signatures, there is likely reasonable climate predictability "IF" natural variability and "unforced variations" are taken seriously by focusing on internal ocean oscillations instead of more chaotic atmospheric oscillations.
Posted by Unknown at 8:57 AM