"Global" versus the Oceans - Part Three

With grand plans of connecting Antarctic sea ice and the Circumpolar Current to not only climate change but geomagnetic field reversals, there needs to be a solid reference to trace events back through time.  Bantanja and van de Wal provide a remarkable well constructed set of data for 45N to the pole.  But 45N to the pole is not "Global". 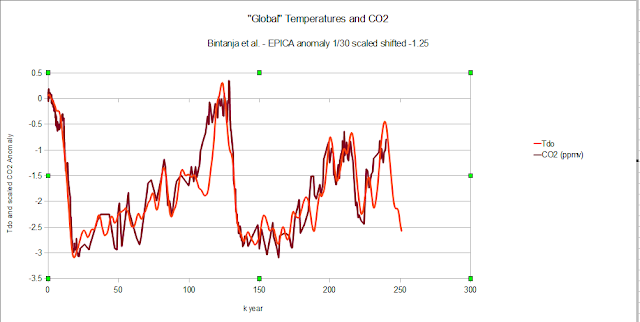 Using the BW Tdo or Temperature of the deep ocean and the EPICA CO2 reconstruction you can scale and offset Antarctic reconstructed CO2 to very closely match North Atlantic deep ocean water temperature.  Since BW reference temperatures to "today", their reconstruction provides the baseline value.  In order to scale the CO2 data, the average for the period 0 to 100 k years was determined, (239.1 ppmv) then the anomaly was created by subtracting the average from the individual data point.  Then to convert to "today" 1.25 was subtracted from the anomaly.  The fit is not perfect but reasonable considering the data sets are from opposite poles. 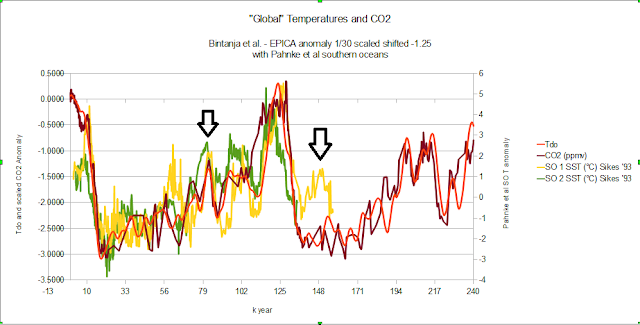 This is a little more controversial comparison.  The Martin et al. 2002 Bottom Water Temperatures, (Tropical Atlantic Core M16772:    1°21'S, 11°58'W, 3912m water depth.  also labeled as M16722 in the Excel download and Tropical Pacific Core TR163-31P:  3°35'S, 83°57'W, 3205m water depth.) have what I call an inverse relation to CO2 following a perturbation.  The Tropical Pacific core is more consistently warming while CO2 concentration decreases but the Tropical Atlantic also other than an abrupt change at ~80ka has a similar divergence from the CO2 trend.  Compared the the Pahnke data sets, the fit is terrible.  That terrible fit though could be an indication of ACC impact on the ThermoHaline Current (THC).

Martinez-Garcia et al. 2010, Subantarctic Atlantic and Subarctic Pacific 3.6 Ma Alkenone SST Reconstructions. (DOI:10.1126/science.1184480) has an interesting fit with the scaled CO2.  The scaled CO2 does not fit either data set perfectly but does tend to follow the combined sets with emphasis more on one than the other at some points.  The slope of the scaled CO2 is nearly a perfect match of the slopes of the sub-Antarctic and Eastern Pacific temperature reconstructions.  The oscillations between the two temperature sets should provide some information on changes in the ACC and its impact on the THC.

Since the EPICA core does not extend far enough back in time for a continuous "standard", a combination of the BW Tdo and the Herbert et al. Tropical Oceans may be required for the next step back in time.