Any Golfer, Baseball Player or Physicist knows about sweet spots.  Where the least amount of energy provides the greatest result.  In golf, many players pay big bucks to get frequency tuned shafts and cavity backed irons.  The oversize metal woods like the aluminum baseball bat have larger "sweet spots" where  less velocity produces greater distance that wooden clubs or bats.  One of the best, but somewhat difficult to master golf swings, is David Duval's in his prime.

Constant acceleration through the point of contact, SWEET!  If you over swing or under swing you just don't get the same results.

The Martin et al. bottom water temperatures don't cover the same period, but comparing the last two deglaciations shows what I am talking about.  The penultimate deglaciation had the Tropical Eastern Pacific BWT out of phase with the Atlantic BWT.  The energy collected by the Pacific was partically transferred to the Atlantic, but not with the proper timeing to over come the thermal inertia of the Atlantic waters.  In the last deglaciation, a synchronizing pulse circa 80 k years ago shifted the momentum of the Atlantic bottom water so that with the following solar pulse the sweet spot was hit.

The shift from 41 ka cycles to the current ~100 ka maybe cycle is due to changes in the internal harmonics of the global ocean heat transfer.  Bold statement, right? 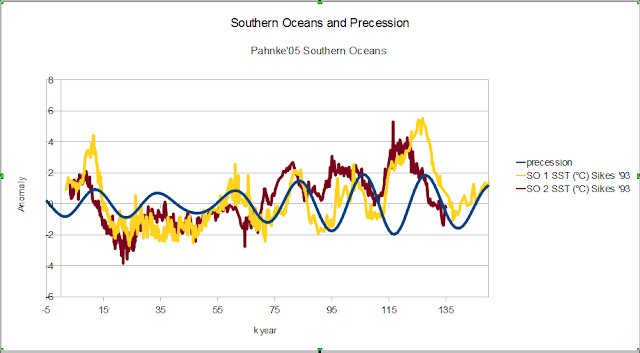 This chart of the Pahnke southern ocean SST with estimated solar precession also shows how with in phase orientation, there is greater results for less energy applied.

Looking at the first chart again, the x-axis is scaled to 23ka years and shift to align with some of the more interesting peaks.  The precession frequency is not exact and the decay frequency or internal harmonics of the oceans are not exactly tuned to the precessional frequency.  The 4.3ka recurrent frequency of the ocean oscillations from precessional perturbation is not a perfect "fifth", it is a little out of tune.  The Oceans also have a ~5.8ka decay from the 41ka obliquity perturbations indicating they decay well before that next perturbations.  The oceans are current tuned to ~21.5ka cycles which drift allows to synchronize either with precession or with every second or third obliquity cycle.

Showing why there is a new tuning since ~800ka years ago is a challenge, but the precessional cycle has been in charge in the distant past.

Between 1800ka and 2000 ka years before present, the Earth's Geomagnetic field was also in the current orientation and developed the start of the `~100ka ice age cycles.  Even then the range of oceans temperatures was small with no hint of runaway climate.  In fact the short precession frequency produced a smaller range of variation.

Timing is everything in nonlinear dynamics, whether it is a golf swing or paleo climate.
Posted by Unknown at 6:39 PM