Playing with ENSO and Solar

Updated with all new chart at the end! 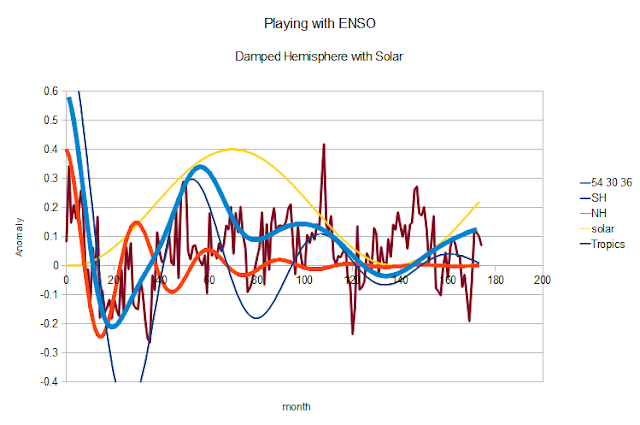 One of the guys crazy enough to listen to my theories wanted to know more about natural variability.  The chart above is a damped cosine with Tau = 54 months, another with Tau = 30 month and a sine wave for Solar TSI variation with 140 period and 36 month lag.  The 54 30 36 is the sum of those curves.  The background tropics is from HADCRUT4 since I had it on the spread sheet.  The delay in heat transfer from the tropics toward the hemispheres or how long it takes the atmosphere and currents to make that energy available in the higher latitudes varies.  This chart just gives a rough idea of what may be happening for this one particular event.  Every event will be different because the harmonic or resonance frequencies change for a variety of reasons.  One of the neater ones is ocean heat capacity.

When the oceans or one hemisphere relative to the other has different or lower than "normal" capacity, the rate of uptake or release of the ocean energy would of course change.  That change can be seen, if you look hard enough, in various data that is readily available.  Sea level is related to heat capacity, diurnal temperature differences  and of course the rates of change in surface temperature would be related, to ocean heat capacity. and the distribution of that capacity.  That simple means that "Sensitivity" changes.  It will decay toward some new "normal". 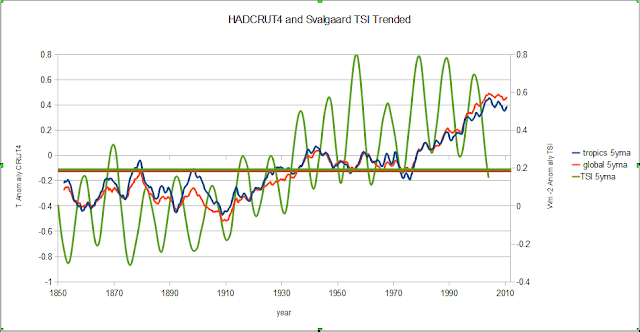 With everything changing, I thought I would use this unique view to illustrate how Solar and Climate are related but not very predictably.  I trended, or added a 0.8 C per century slope to the Svalgaard Total Solar Irradiance or Insolation (TSI) reconstruction instead of detrending the HADCRUT4 temperature record.  Early in the period, Climate was more sensitive to solar changes and as ocean heat content increased, the sensitivity to solar decreased.  There are CO2 and other forcings in there as well, but this tends to indicate than Solar is not negligible by any stretch of the imagination. Because Solar impacts a variety of "layers" of atmosphere and oceans, the solar energy in averaged over a longer time period and can create the steps in the temperature record.  The downward slope from these steps would be an indication of the ocean heat capacity relative to "normal" and the current "pause" is likely an indication of "normal" for the current conditions being reached.

I just thought a few folks might get a kick out of this non-standard view of Climate.

Since the change in the relationship of one region to another tends to highly shifts in climate better than the more slow changing "trends" this chart show the average solar from 1850 with the difference between NH temperatures, total and SST, minus the tropical temperatures.  This would be the similar to the AMO, though it would include northern Pacific variation.  The Holy Climate Shift! arrow is where Scandinavian temperatures jumped nearly 3 degrees and remained on that step.
Posted by Unknown at 5:26 PM