There are few locations on Earth that stand a chance of being representative of past climate better than Southern South America.  It is the Best Place to Start since it is highly influenced by the Humbolt Current and the Antarctic Circumpolar Current variations.  ENSO cycles on scales of hundreds of years influence climate and the Southern Eastern Pacific ocean is the best indication of the start of those cycles.

While it would be convinient to have all the answers to changes in forcing that impact climate, the fact is that climate is dynamic with long term settling times that appears as Unforced Internal Oscillation that cannot be dismissed.  Even the initiation of what may be the Atlantic Multi-decadal Oscillation appears in the southern oceans nearly three decades before the obvious shift. 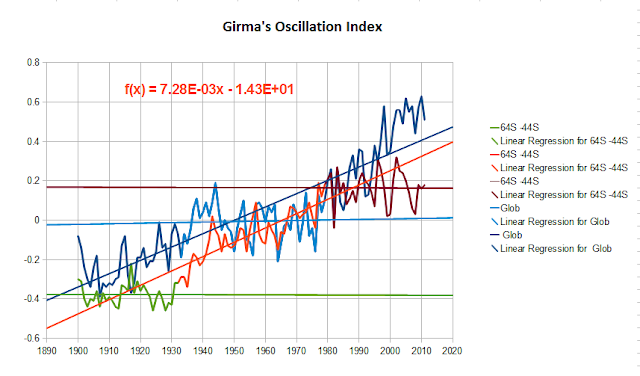 Girma, an online denizen that frequents Dr. Judith Curry's Climate Etc. blog, obsessively points out that there is a repeatable pattern in the instrumental climate record.  What is missing is a way to identify the cause and predict the impact on future climate.

Instead of an Index, which doesn't correlate to actual temperature impact, the Southern Ocean Oscillation can be compared with regional data to estimate the timing and rough magnitude of the impact of the shifts in the oscillation.  While far from perfect, the pseudo cyclic oscillation appears to have more predictive capability than any other longer term oscillatory pattern.

So instead of taking my word for it, I recommend that those interested download a copy of the Neukom et al. Southern South American temperature reconstruction, average the reconstruction over the 1880 to 1995 overlap period and have at prognostication.  Pass it along to your friends and impress strangers with your new climate predictions.

The GISS LOTI data can be obtained at GISTemp Zonal Means.