Climate today is being compared to past climate to predict future climate.  Only one problem, the conditions in the past do not exist today and many unlikely to exist in the future.  So what drove the changes in the past will likely not have the same impact in the future.  This is the single most difficult point to explain in the climate debate. 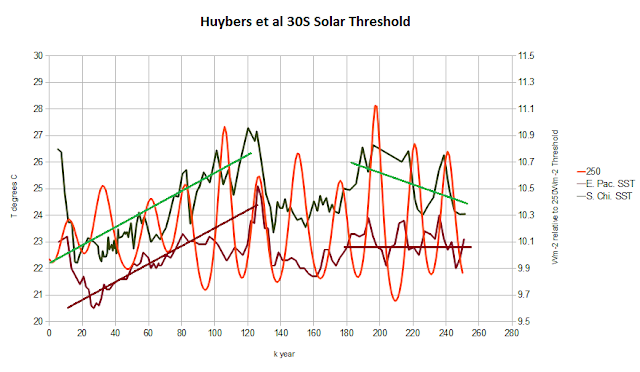 The solar insolation typically used for "Ice Age" comparisons is 65N or in some studies 70S.  The chart above use Huybers et al. data for 30S and the 250Wm-2 threshold.  When both the Solar and either of the SST reconstructions (Herbert et al. 2010) are above a threshold or "Sweet Spot", there is a coordinated response.   Below a certain threshold, there is little or no response to solar.  The rise of the South China Sea from 250ka to 200ka was not inphase with the Eastern Pacific or the penultimate deglaciation would have occurred 20 to 40ka before it did.  At 150ka, the Eastern Pacific was below its threshold and the South china Sea was decreasing.  The decrease in the Eastern Tropical Pacific was likely due to Southern Hemisphere sea ice and circulation that changed the heat transfer efficiency in the southern oceans.

Once both the Eastern Pacific and South China Sea reached their peaks, prior to peak solar, the decline into the last glacial maximum (LGM) began, undoubtedly aided by Northern Hemisphere increasing ice mass.  The decline into the LGM took 100,000 years from the peak Pacific ocean temperatures.

The common thought process is that that cycle is repeatable.  With mankind claiming the vast expanse of lands that where covered by glacial ice in the LGM, it is unlikely that man would fall asleep at the switch for 100,000 years to allow the gradual accumulation of glacial ice.  So it is not productive to compare a response to solar forcing where glacial ice is a major feedback.  That would be comparing apples to frozen oranges.  Periods where ice extent are more inline with what "should" be expected, would be a better comparison if attempting to predict future climate.

Quite a few researchers have attempted to use paleo data to determine "climate sensitivity".  Using perfectly valid methods, they arrive at ranges from 0.7 to 9 C degrees per doubling of CO2.  The higher estimates are generally based on the most recent past 400,000 years where the would be nearly maximum ice albedo feedback and ice mass thermal feedback with ocean current impacts thrown in to boot.

By eliminating the Ice variable that impacts radiant forcing, the internal dynamics of the oceans relative to an expectation of future minimal ice expanse condition would allow not only a simpler, but more accurate prediction of impact due to various "pertinent" forcing combinations.

This confusion over where to focus attention is likely the largest stumbling block in the climate debate.  Multi-millennial land use impact cannot be ignored.