"Global" versus the Oceans - Part Two

In part one I hinted that this climate journey may be fun.  To the left is graphic of geomagnetic reversals.  These reversals have occurred at random times in the past.  The most recent reversal was roughly 0.79 million years ago according to the Wikipedia article that accompanied the graphic.  That reversal just happened to coincide with the odd shift in climate roughly 800,000 years ago.  The reversal did not exactly match a definite climate pulse or shift, but was close enough to have a good number of scientist speculated that climate change was caused by geomagnetic reversals.  Even today, there are geomagnetic affectionados that suspect climate is controlled by the interaction between the magnetic fields of the Sun and the Earth. But what caused what?  Are reversals random events or are they related to climate?

In a chaotic system cause and effect are easily confused.  Correlation between seemingly  not physically connected phenomenon are close enough to indicate a linkage, but not close enough to establish causation. Since they are so closely related, each should be a part of the more complex puzzle, if one can just connect a few of the starting pieces. 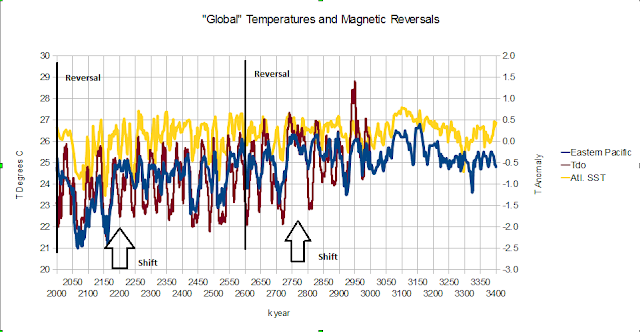 This chart of the Herbert et al. 2010 Tropical Atlantic and Eastern Pacific SST with the Bintanja and van de Wal 2008 (BW) referenced in part one, focuses on a climate shift at ~2725 k years ago with a vertical line at 2600 k years indicating a geomagnetic reversal.  Approximately 125,000 years after the large climate shift, there was a reversal.  This climate shift is easy to see in the data.  Following the reversal there was a less obvious change in the chaotic pattern of temperature data.  The data has a reduction in variance, it calms down, until roughly 2170 k years where there is a noticeable increase in variation.  Roughly 150,000 years later this time, there is another geomagnetic reversal.  The shifts in climate are equally evident in both the BW Tdo, and the Herbert Eastern Pacific SST.  More obvious in the 2700 ka event was the reduction in variance of the Eastern Pacific SST.  For an event to cause not only a large climate shift but also a geomagnetic reversal, it would likely be pretty impressive.

The Eastern Pacific temperature record is in a unique location where is would indicate very well changes in the Antarctic Circumpolar Current which can be impacted by Antarctic Glacial and "fixed" ice extent.  Since the Antarctic is the "rotational" base of the planet, a significant shift in the glacial mass could produce an exaggerated "wobble" in the Earth's orbital pattern.  The stress of such a change could cause a geomagnetic reversal by stressing the internal molten dynamo that generates the magnetic field.

There are a lot of coulds in that last paragraph.  Moving from "could" to "likely" is a long row to hoe.