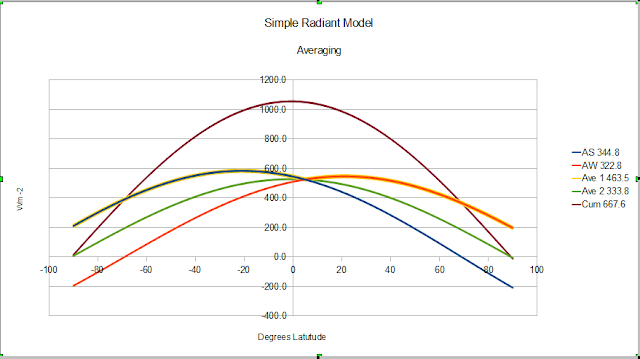 Since our rock has a few idiosyncrasies, like tilting and wandering around on that tilt, this use of the simple radiant model is show the subtle effects.  AS is Austral Summer, when the southern hemisphere is closer to the Sun and the Earth is also closer to the Sun.  Instead of 1361Wm-2, the solar energy in AS is close to 1410Wm-2.  That is about 3.6% greater than "average".  In AW, Austral Winter, the Northern hemisphere is tilted toward the Sun and the Earth if further away from the Sun.  The average solar energy during AW is about 1320Wm-2 or 3.6% less than "normal".  The model average is 344.8 for AS, 322.8 for AW then I have Average 1 and Average 2.  Average 1 is the annual average of just AS and AW for daylight.  Since half of the globe would be dark, the global average according to the Simple Radiant model would be half or 231 Wm-2.  That is a little lower than the 236 to 239 Wm-2 average used most calculations.  Then the Simple model is using exactly .30 albedo and rounding solar energy a tiny bit.

Since the Earth is round, the simplest way to estimate "average" solar energy is TSI*(1-abedo)/4, where 4 is the ratio of the surface area of a Sphere to a Flat Disc.  With TSI = 1361 and albedo = 0.30, then "average" Solar energy available at the Top of the Atmosphere would be 238.2Wm-2 per day.

The Simple Radiant Model is less than perfect, but it should be consistent.  The SRM "average" is 231 versus 238, the cumulative average would be 334 and the simple average, 167 Wm-2.

This SRM is not supposed to provide exact number for any "average".  It is only designed to provide a reference.  Some may have noticed that no "Greenhouse Effect" is involved in any way with the SRM.  That is because, in my opinion, there are too many assumptions made of what "average" would be without a GHE.

Why use this Simple Radiant Model?

With energy provided mainly at the equator, internally, that energy has to be transferred towards the poles.  The Cosine function simply provides a visual tool.  Since the Earth has an equatorial radius of ~6371 kilometers, the Cosine of the latitude times the radius would be the radius of a parallel slice of Earth at that latitude.  At latitude 60, the Cosine is 0.5, so 50% of the equatorial "wall" would be available at latitude 60 to internal pole ward heat transfer if the "slice" were the same depth.  The altitude of the tropopause at the equator might be 20 kilometers, the the internal energy transfer were ideal, it would be 10 kilometers at the 60 degree latitude "slice".  It is not, but the difference between "ideal" and actual is meaningful.  By the same logic the slice at latitude 75 would be nearly 50% of  latitude 60 slice.  Just like the simple regulator, the area available for flow decreases as the height or radius of the section, decreases.