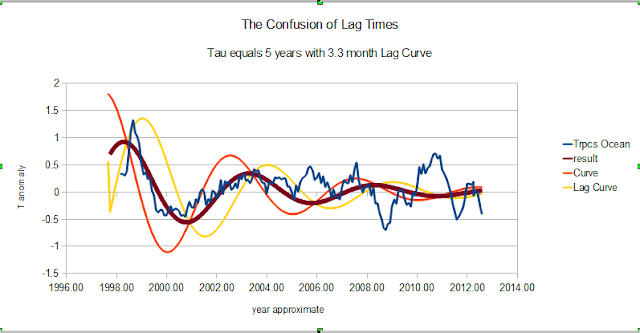 This chart is just for illustration so don't go nutz thinking the climate problem is resolved.  What is shows is  how different delays to a perturbations can sum to a response curve that doesn't resemble the perturbation.  I have said may times that the "noise" in climate is actually the more interesting "signal".  Schwartz et al. published a paper saying they had "found" THE lag time and were able to calculate climate "sensitivity"  Their paper was met with "YOU CAN"T DO THAT!"  Actually, you can, but you need to be BERRY BERRY CWARFUL how you interpret your results.

The truth is there is a roughly five year lag and it does give you a clue about climate sensitivity.  In this case there is likely a charge time for the upper oceans on the order of 5 years, but that 5 years is not a guarantee.

The weakly damped ~5 year (currently) lag/decay has several "bumps" that can "synchronize" with a future perturbation, like solar.  Solar itself has a not so reliable cyclic nature, so the "synchronization" is pretty random.  Solar though is close enough to being "predictable" that a smart person with plenty of computer time on their hands could make a reasonable forecast a decade or two in advance.  However, this is just one of many weakly damped decay curves of likely hundreds.
Posted by Unknown at 8:21 AM