Weakly Damped Lost in the Noise

Natural internal oscillations appear to be weakly damped.  Since the forcings are not using the same dampening, that leads to fun "seeing" what is going on in the climate system.  To dig out some of the "signal" there are some simple ways that don't require a ton of work.

This chart is the difference of the 11 and 4 year moving averages for the NH, Tropics and SH HADCRUT4 data.  We now have a signal envelop.  As you can see, the NH and SH do not respond the same to the forcing signal, likely the solar cycle variations. 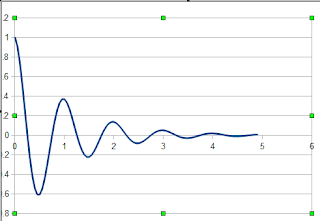 This chart is just a weakly damped sinewave.  When a solar cycle is in phase with the first peak, it would have the greatest impact, the second peak would have noticeable impact and the third peak may or may not be large enough to notice.  Since the solar cycle is only in phase every second to fifth oscillation, trying to isolate solar's true impact would be a major bitch.  Needless to say, assuming a 2 or 3 year lag without considering the internal dampening, would be pretty useless.
Posted by Unknown at 3:29 PM