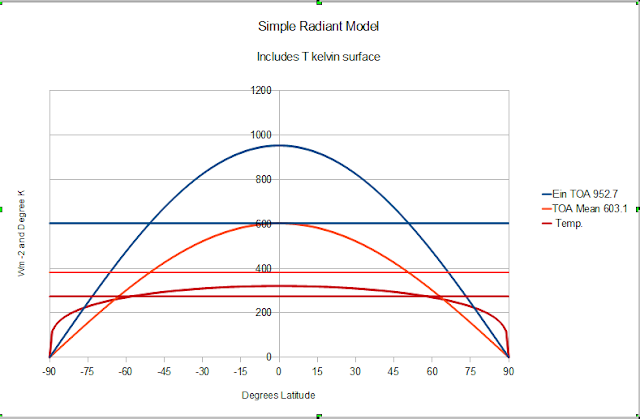 So here is the simple radiant model again.  Ein TOA is 70% of 1361Wm-2 or roughly the solar energy available corrected for estimated albedo.  The mean distribution of that energy 603 Wm-2, shown with the blue mean value line and the 603.1 average of the blue curve.  The mean of that 603 curve is ~390 Wm-2.  The red curve is temperature determined using S-B (Wm-2/5.67e-8)^.25, the Stefan-Boltzmann relationship.

This simple model is not designed to resolve all the issues of climate change, only to illustrate the relationship of energy and its 4th power cousin temperature.  The transfer of energy poleward, is the key component of global "mean" temperature.  If earth had a denser atmosphere, it would be effectively isothermal.  If Earth had no atmosphere, it would get hot on the sun lit side and cold as all get out on the darkside.  That would require another simple model based on longitude.  It should not be necessary to merge two models to illustrate that the sunny side is uniformly warm and the variance in temperature for an ideal world starts increasing as the poles are approached.  If the energy is shifted north or south of the equator, the pole closer to the shift would have a more uniform temperature and the one further away a more radiacle change in temperature.  No change in global "forcing" is required to significantly change poleward temperature.

Location, location, location.  That is just to remind the radiant only affecionadoes that the density and composition of the "surface" has a huge impact on temperature distribution.

Now the model is for an ideal planet with no tilt, the energy is applied at the equator.  The Earth tilts at roughly 21 degrees and there is nearly 8% difference in the energy applied to the two hemispheres due to the  elliptical orbit around the Sun. 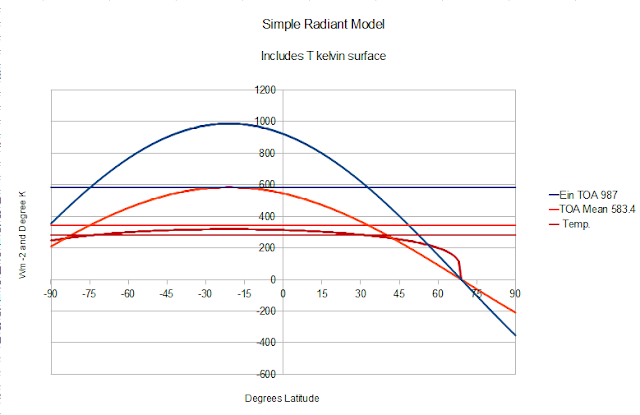 By shifting the peak energy South by 21 degrees latitude and increasing solar insulation, the simple radiant model produces a southern hemisphere "lobe"  of energy but the northern hemisphere temperature impact begins in noticably at the equator and drops off the chart at roughly 70 degrees north.  This is the Austral summer configuration.  If I were to combine this with an Austral winter snapshot, there would be two "lobes"  with a dip near the equator.  By merging those two charts, you would have a rough "ideal" Theta E of the atmosphere or potential temperature only in terms of energy Wm-2. 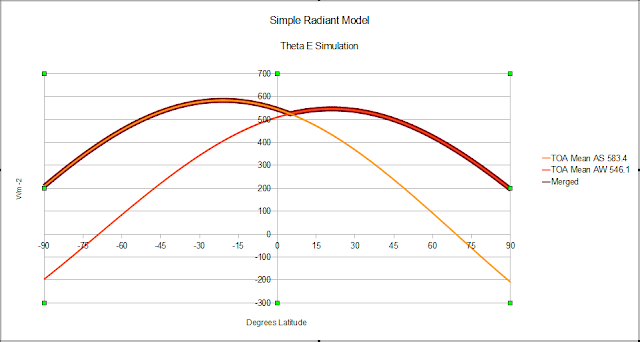 The "true" Theta E would depend on the rate of energy release from the surface.  Each layer, liquid, solid, and gas would have different energy transfer rates based on the physical properties of each layer.
Posted by Unknown at 5:45 AM