"Global" versus the Oceans - Part One


ABSTRACT:
The onset of major glaciations in the Northern Hemisphere about 2.7 million years ago was most probably induced by climate cooling during the late Pliocene epoch. These glaciations, during which the Northern Hemisphere ice sheets successively expanded and retreated, are superimposed on this long-term climate trend, and have been linked to variations in the Earth's orbital parameters. One intriguing problem associated with orbitally driven glacial cycles is the transition from 41,000-year to 100,000-year climatic cycles that occurred without an apparent change in insolation forcing. Several hypotheses have been proposed to explain the transition, both including and excluding ice-sheet dynamics. Difficulties in finding a conclusive answer to this palaeoclimatic problem are related to the lack of sufficiently long records of ice-sheet volume or sea level. Here we use a comprehensive ice-sheet model and a simple ocean-temperature model to extract three-million-year mutually consistent records of surface air temperature, ice volume and sea level from marine benthic oxygen isotopes. Although these records and their relative phasings are subject to considerable uncertainty owing to limited availability of palaeoclimate constraints, the results suggest that the gradual emergence of the 100,000-year cycles can be attributed to the increased ability of the merged North American ice sheets to survive insolation maxima and reach continental-scale size. The oversized, wet-based ice sheet probably responded to the subsequent insolation maximum by rapid thinning through increased basal-sliding, thereby initiating a glacial termination. Based on our assessment of the temporal changes in air temperature and ice volume during individual glacials, we demonstrate the importance of ice dynamics and ice-climate interactions in establishing the 100,000-year glacial cycles, with enhanced North American ice sheet growth and the subsequent merging of the ice sheets being key elements.

Bintanja and van de Wal (BW) have amassed an impressive amount of data with this note, "The reconstructed atmospheric surface air temperatures apply to all subarctic to arctic land masses (including continental shelves) north of about ~45N."  So yet again, "global" conditions are based on a fraction of the "Globe".  In the plot of the BW data above, Tdo is Temperature of the deep oceans, Tsurf, is surface temperature relative to ~45N and above and RSL is sea level relative to today. 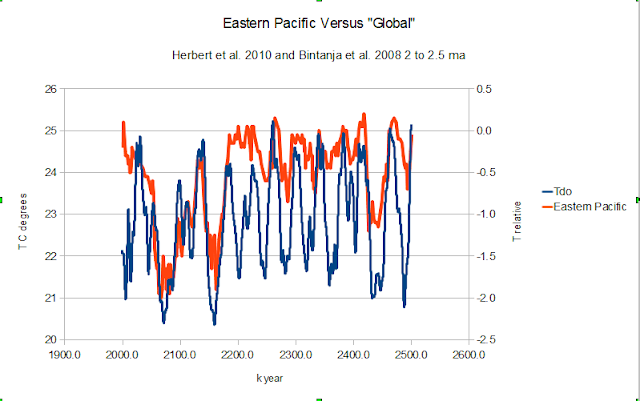 This plot compares BW Tdo with the Tropical Eastern Pacific SST reconstruction of Herbert et al. 2010.  At ~2200 k years before present there is a rather dramatic "shift".  From ~2400 ka to 2200 ka there were 200,000 years of stable Tropical Eastern Pacific SSTs that abruptly changed.  In looking into the influence of Antarctic Circumpolar Current (ACC) variations on climate sensitivity, both in the past and today, the fixation of climate science on the Northern Hemisphere, appears to be confusing one of the main issues or climate, internal oceans oscillations.  The detailed 45N data provided by BW can be useful as a "Standard" to compare to truly Global changes. 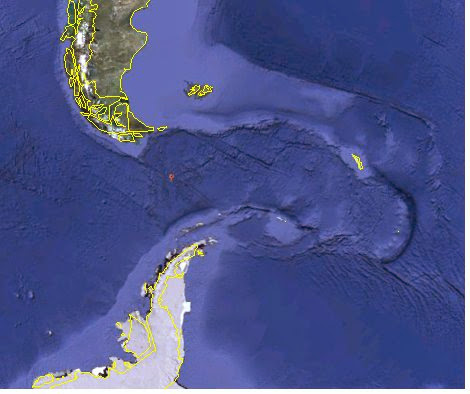 The Google Earth image above is the Drake Passage, a narrow ~400 mile wide channel for the 100 plus million cubic meters per second ACC flow.  At roughly 4 times the total volume of the Gulf Stream, the ACC has this narrows to negotiate on its circumpolar journey.  That huge volume of often ice choked current would create erosion or scour of the land masses bounding the flow.  With volcanic islands to "fix" growing ice sheets and large polar tidal actions, the efficiency of flow could vary greatly on all time scales.  Massive ice sheets "fixed" to pinpoints of land mass, would makes changes in ice mass not always have large impacts on global sea level. 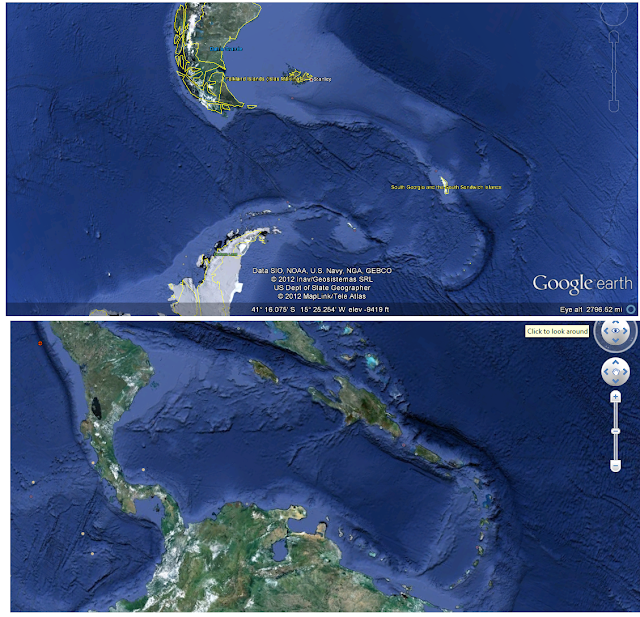 The Drake Passage is not the only area of the Earth with the distinctive scour pattern.  The Southern Caribbean has a very similar pattern, possibly indicating that the rotational orientation of Earth could have shifted during various times in the past, influencing the direction and rate of continental drift.  By more closely investigating the transition from the 41ka to ~100ka  apparent change in the glacial cycle of the "Planet" we may be able to gain some insight into current climate sensitivity to "all" factors that influence climate.

Since the Antarctic Circumpolar Current produces the majority of ocean mixing and the rate of Antarctic sea ice formation and thaw drives the majority of the deep ocean circulation, the Southern Pole appears to be the perfect place to start, it is the Earth's Radiator.

This is Part One of hopefully an entertaining journey through climate.
Posted by Unknown at 11:52 AM